By Mike Creger and Kerry Rodd 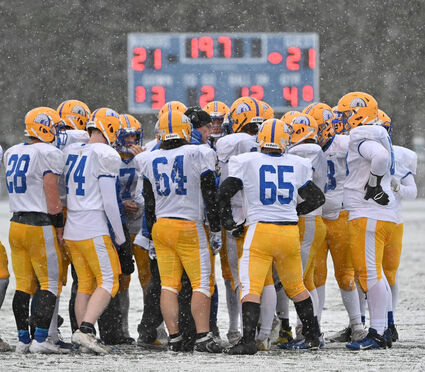 With the game 21-21 with just more than 19 seconds left, Esko coach Scott Arntson took a timeout on third down and the team decided to take one shot at the endzone. Quarterback Ty Christensen and receiver Carter Zezulka connected on a fade pass and Esko won the Class AAA quarterfinal game in Brainerd, 28-21 against New London-Spicer. Up next is U.S. Bank Stadium in Minneapolis Saturday against Dassel-Cokato. Esko won a state football championship in 1975. It has reached the tournament 11 times since then, the last time in 2019, but the Eskomos haven't been able to return to the championship game. Now they are one game away.

The clock showed 19.7 seconds left in the fourth quarter. Esko had battled, back and forth, with New London-Spicer in the Class AAA state quarterfinal in Brainerd Saturday afternoon. The score was tied, and now the Eskomos had the advantage, the ball on the 11-yard line. It was third down, and Esko coach Scott Arntson was ready to call another run to center the ball for reliable field kicker Wyatt Stankiewicz.

"You want to take a shot?" That's what Arntson recalls hearing from Stankiewicz during that timeout.

Arntson likes to say he coaches mathematics and teaches football. He liked the odds and decided the team should take Stankiewicz's suggestion.

That the team was in this high-percentage situation for what became a 28-21 win was the result of a lot of resiliency on a snow-spattered day at Brainerd High School.

Carter Zezulka had been having quite a football game. After a frustrating first half that saw Esko trailing in a game for the first time all season. It was 7-0 at halftime and the offense had been stymied.

"They are a big, strong team that blitzed a lot and we struggled with that in the first half," Arntson said. "We struggled with our option game so we spread things out, started running some isolation plays and we felt we had a couple of matchups we could take advantage of."

Zezulka got the lead for his team with an interception return for a touchdown in the middle of the third quarter. With a touchdown run from Koi Perich just a minute earlier, the Eskomos now led 14-7.

"Here we go," Arntson remembers thinking as the game started to heat up. "Our guys fought back and found a way to respond."

But the Wildcats stormed back, scoring late in the third with a 32-yard pass. The game was tied at 14.

Arntson was still kicking himself this week for a decision he made next that gave New London-Spicer a short field and eventually a 21-14 lead.

"It's a cliche, I know," Arntson said, "but we tell players that it's always about the next play. Anything can happen."

Arntson called for a fake punt. It didn't work and the Wildcats marched into the endzone with nine minutes left and a touchdown advantage.

Any play. Esko was in unfamiliar territory again, and Arntson wasn't going to accept his players letting any doubt creep in.

With less than half a quarter to play, the Eskomos shook off whatever may have been lurking in their minds, putting together a big drive capped by a 5-yard touchdown run from Joey Antonutti.

Enter the heroics of Carter Zezulka. Esko got a stop and, with 1:30 to go, they were 60-some yards away from the Wildcats' endzone.

"Carter caught a big throw," Arntson said. "Had he been able to keep his feet he would have scored." Nevertheless, the 29-yard play put the Eskomos deep in Wildcats territory and dreams of a winning Stankiewicz kick were forming. He had made what became the game winner the week before in a slugfest with Aitkin.

Now, with that 19.4 on the clock, and Arntson taking his kicker's suggestion, the orders were given. "We'll take one shot." Fade to the corner. Don't take a sack. No penalties.

"Carter went to State in the high jump," Arntson said. It was an easy call. Quarterback Ty Christensen knew that if the play wasn't there, just throw it away.

"They were blitzing two guys all day and Ty was under pressure all game long throwing the ball," Arntson said. "Carter is one of our best athletes and we like our matchup with him on the outside."

The result falls into Esko athletics lore as the team is one of just four left in Class AAA.

"These are rare games," Arntson said this week. "I told the kids that this game is what they'll tell their grandkids about."

Zezulka will be a big part of those stories. He made the catch and propelled the Eskomos to U.S. Bank Stadium Saturday for the Class AAA semifinal against Dassel-Cokato. Zezulka had 67 yards on three catches as Christensen found a way to go 9 for 13 and 166 yards. Kade Gonsorowski had a big 48-yard catch. Perich ground for 48 total yards on the ground.

There will also be talk of nabbing five interceptions on a Wildcats quarterback who had thrown just four picks all year. Arntson said he gives all the credit there to defensive coach George Perich.

And there was snow. And a raucous crowd. And a floating bus trip home.

"The game was just so back-and-forth and up-and-down that it was just amazing," Arntson said.

He said his players are doing well in soaking up the rare place they find themselves in. "They're enjoying it."

Sophomore runningback Makoi Perich rushed for a total of 48 yards during Saturday's game with a touchdown.

"This team has shown a lot of resilience all season and showed it again when we trailed twice," Arntson said. "Our kids have confidence in their ability to make plays and we got some big plays when we needed them, and not just the plays we scored on, but some other defensive and offensive plays during the game, or we wouldn't have won."

Saturday's game in Minneapolis starts at 4:30. Dassel-Cokato is also undefeated and trounced New London-Spicer earlier in the year. They are "another one of those teams that seems to be in the tournament every season," Arntson said.

He watched all of the Chargers' games and finds them to be a well-balanced team with "not a lot of weaknesses."

But, Arntson said, there are only four teams left, so of course the competition is as tough as it gets. "We will have our hands full, but we'll just go down there and see what our kids can do," he said. "What an opportunity."