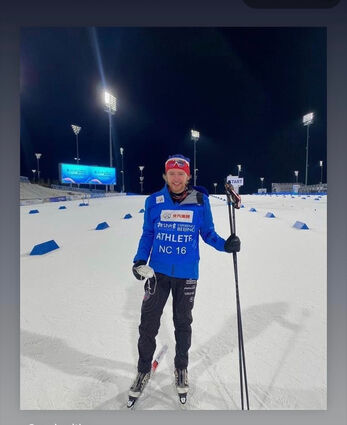 Cloquet Class of 2019 grad Aidan Ripp is competing in the U.S. Olympic Team trials in Lake Placid today, hoping to represent the United States in the Winter Olympics in China in February.

Ripp, a sophomore at Paul Smith's College in New York's Adirondack State Park, qualified at the Continental Cup event in Beijing, China, Dec. 4-5. It gave him enough points to compete in the trials in Nordic combined, which combines ski jumping with Nordic skiing.

Ripp learned to jump at Cloquet's Pine Valley. As a student athlete at Paul Smith, his home base is the Lake Placid complex, and now he also has experience with the jumping and skiing venues that will be used for the Olympic games.

Getting to this point has not been easy for Ripp, who battled through the pandemic and limited ski jump training while the Lake Placid jumps were being updated and modernized.

"It is gratifying to see an athlete train for basically two years without competition and to get the chance and execute at their best potential," said Matt Dougherty, Paul Smith's College Nordic coach in a statement. "It is so hard for an athlete to train and be competition-ready at any time waiting on the opportunity, but Aidan has been diligent and patient."

Highlights of Friday's Nordic combined trials will be included in coverage of the men's and women's ski jumping trials beginning at 11:30 p.m. Saturday on NBC.