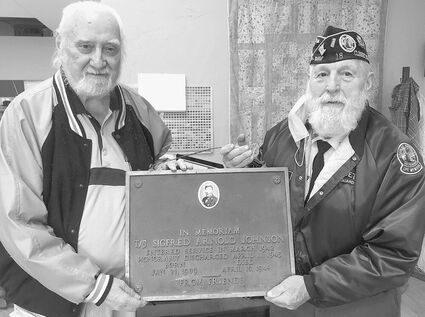 Ken Johnson, left, of Cloquet recently accepted a found bronze plaque honoring his uncle, Sigfred Johnson, who died in 1948. John Prouty, right, found Johnson after making a plea with the Pine Knot News about finding family members. Another mystery was solved this past week.

We have found some more clues in the curious case of a plaque honoring Sigfred Johnson, a World War II veteran from Cloquet who died in 1948. As reported in the Dec. 17 issue of the Pine Knot, the plaque was discovered hanging on a wall at a salvage yard in the area.

Bonnie Edin called after reading the story and insisted that she found the plaque among her father's things when he passed away and gave it to Ken Johnson, Sigfred's nephew. We found Ken after John Prouty showed us a picture of the plaque and said he wanted to hand it over to a family member.

Ken received the plaque in the Pine...