No injuries in train/semi crash 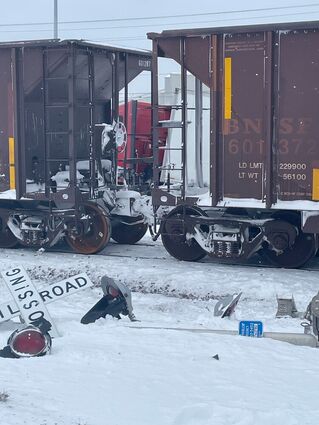 A semi-tractor trailer can be seen between rail cars Monday near Sappi in Cloquet. A train hit the truck just after noon.

An empty semi-truck that was stuck on the railroad tracks near the Sappi guardhouse was hit by a Burlington Northern train Monday.

According to Cloquet Area Fire District battalion chief Jeremy Hutchison there were no injuries: the driver had gotten out of the truck before it was struck by the train. The call came in at 12:18 p.m. Monday, Dec. 27. CAFD, the Cloquet police department and the Minnesota state patrol responded.

"There were no injuries, no spills or fire or hazardous chemicals," Hutchison said.

He added that the train staff focused on making sure there was still access to Sappi...