'Give her babies back' 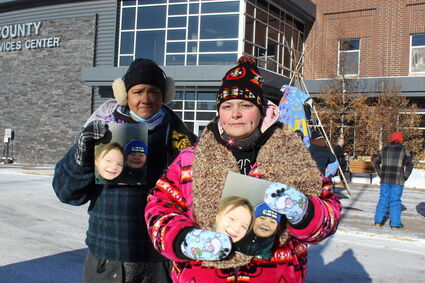 Photos and video showing the alleged child abuse of at least two Native American children in foster care set off a Facebook firestorm last week that has ballooned into a series of protests that organizers say will continue in Carlton County until the children are deemed safe.

One video shows a toddler being spanked repeatedly. Another shows a boy between the ages of 5 and 10 years old wearing only what looks like a diaper while he's being hit in the back with a spatula. The same boy is pictured again being grabbed by the neck, his skin pulled toward the woman grabbing him. Because no charges have been filed on any alleged perpetrators and the alleged victims are juveniles, the newspaper will not name them in this story despite the names being revealed over social media.

Danielle Martineau, aunt to one of the boys in the photo, who has a brother also in foster care, said she reported the abuse after her three nieces showed her videos and photos taken when they were in the care of the two women being accused.

The nieces were at a funeral wake for Martineau's mother, their grandmother, and opened up to family members.

"I was disgusted and heartbroken to see the evidence and hear the stories of what they had to endure," Danielle Martineau told the Pine Knot News in an interview Friday. Martineau said she took care of her nephews in her home for a year before they went into foster care, and that she advocated for them to go to the person she now thinks should be charged with child abuse.

The older siblings were there already and the woman was a social worker, so Martineau assumed it was a safe place.

Martineau went to Fond du Lac social services on Dec. 30 with the photos, videos and accounts of what had happened, which led to interviews with FDL police and social services, which forwarded the reports to Carlton County social services, she said. Then the Cloquet police took statements from the nieces. "The looks on their faces, after giving that statement, is something I'll never forget," Martineau said. "They got relieved of all that pain they've been holding in for so many years."

According to Martineau and others, her nieces said two Native American foster parents who are related - one living on the Fond du Lac Reservation and one in Cloquet - abused them and siblings in their care – mentally, emotionally and physically.

Cloquet police chief Derek Randall confirmed that his department investigated, with FDL police, and performed a child welfare call for service last week. Prior to starting the investigation, they removed the children from the Cloquet home for 72 hours on Jan. 3, which is within their jurisdiction. The police conducted interviews with the assistance of Carlton County Human Services and the Carlton County Attorney's Office.

The police department often works with or in parallel with social workers in cases of alleged child abuse. When a report comes in, "instead of putting a family or someone through multiple interviews when we're looking for the same information," Randall said, the agencies will use First Witness in Duluth to conduct a forensic interview and share the information.

The fact that the children are Native American and so are the caregivers makes it even more complicated because there are overlapping jurisdictions between the county and the tribe, which have been trying to work together in policing and social services.

The two foster care providers have been cooperating, Randall said.

"Based on the outcome of those interviews and the information we had at the time, at the end of the 72 hours, the county attorney's office did not file for a petition or any charges at that time," Randall said. "Ultimately, the children were returned to the residence [Jan. 6], which sparked the protests."

The case remains under investigation, he said.

"We're continuing to follow up on leads and people that are giving historical information," the police chief said. He encouraged people to call with any information they may have.

Carlton County officials declined to answer questions submitted by the Pine Knot on Monday, citing legal concerns, but acknowledged they were aware of the allegations. "We take all matters regarding the safety and wellbeing of children seriously and investigate any and all allegations of maltreatment," the statement read.

Fond du Lac issued at least one of the foster licenses. "I believe Fond du Lac could also file a petition, just like the county attorney could," Randall said.

A statement released by the Fond du Lac Band seemed to indicate otherwise:

"The safety of our Band members, especially our children are of utmost importance. The Band is working closely with Carlton County to conduct a thorough investigation. The case is under the jurisdiction of Carlton County so the Band is actively advocating for appropriate steps to be taken by the County to protect all children and support the family," it said.

'Give our kids back'

The protests started last Thursday afternoon, Jan. 6. Between 20 and 30 people went to the youth shelter in Cloquet first, "trying to somewhat storm the building," according to Randall. The group later moved to a home on the 1300 block of Carlton Avenue. Standing outside in the dark in temperatures far below zero, they drummed and yelled across the street things like: "We see you, we love you, we will get justice for you," "Give our kids back," "Stop the abuse" and "Every child matters."

Police officers from Cloquet and Fond du Lac stood on the south side of Carlton Avenue between the protestors and the home, where the lights were on and one or two children yelled out the window to the crowd. "They're telling them what to say," a protestor alleged of the adults inside. Other protestors insulted police for protecting the alleged abusers. "You're all Derek Chauvin," a protestor yelled.

Randall said that other than at the youth shelter, the protestors have not been violent. "They're rude and disrespectful toward the officers as people, but I think some of that is just their frustration with the system," he said. He's also received some feedback applauding the officers' professionalism in the face of the name calling.

The next morning, a crowd slowly gathered outside the Carlton County Community Services building in downtown Cloquet, eventually erecting a brightly painted teepee on the sidewalk outside and holding another protest.

Temperatures were still well below zero, and the group spent several hours at the county building before moving back to Carlton Avenue. At least a handful of people have continued either to "hold space" or protest in Cloquet or on the reservation each day since, culminating with a press conference held outside the Carlton County Courthouse Tuesday afternoon.

Protesters outside the courthouse called out Carlton County and Fond du Lac health and human services, police and attorneys. They asked the state to investigate. Again and again they asked: "Why are the children still in their care?" pointing to the photos and video of the alleged abuse.

They acknowledged that both of the alleged abusers are Native American and actually related to most of the children in their care.

Jessica Gidagaakoons Smith talked about historic and current failures to protect Native American children. She said the protesters demand justice and want to be heard.

Reservation leaders have urged people in a statement to not post information on social media "that could be construed as harmful to the family and children or violate their privacy as the investigation continues."

Smith and others see that as an attempt to silence them. "We want the community to know that we are not going to stop fighting until we see those faces on the jail roster," she said of the alleged abusers.

Smith spoke about a mother, Tiffany Ammesmaki, whose children live in the homes in question.

"She has three children that were stolen from her and has been fighting relentlessly for seven years to get them back," Smith said. "She has done everything the courts asked. She has been sober, she has been working. She deserves to have her children back into a home where they were loved and not being abused."

The Pine Knot interviewed Ammesmaki at the Cloquet protest Friday, along with Ashley Ammesmaki Roy, who has two children in foster care in one of the homes.

"They were taken from us and we were led to believe they would be safe," said Tiffany Ammesmaki. "The children are related to them by blood - we put our trust in them."

"Give her babies back," a bystander yelled. 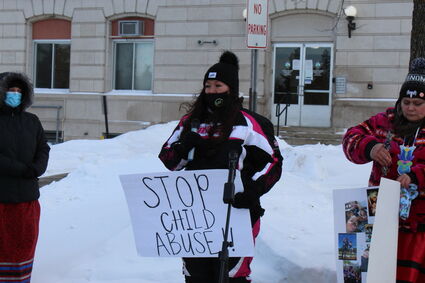 Taysha Martineau, who created the Camp Miigizi encampment and its resident protesters to target the Enbridge pipeline project, doesn't blame the police for following protocol. She said that the situation proves the system needs to be fixed.

She said Camp Miigizi will pay for attorneys to represent the mothers who want to get their children back.

"When it comes to instances like child abuse, everyone should be outraged," Martineau said. Her nephews are in one of the homes.

Taysha spoke on behalf of yet another mother, referring to her by first name only.

"Those children who are in that home, they matter to us, they matter to their community and regardless of their parents' past mistakes, they matter to the parents. Jessica couldn't be here today, but she wants her boys to know she's sorry. And she loves you. And she's gonna do everything she can to make sure you get out of there."