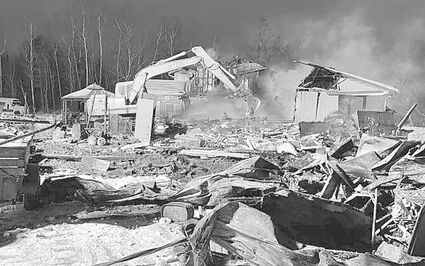 The Johnson home in Esko was destroyed in a fire early Sunday morning in Esko.

A house and garage in Thomson Township were destroyed in a fire Sunday morning. According to a Carlton County Sheriff's Office press release, fire crews were called to 21 Ridge Road north of Esko at about 2 a.m.

Esko Fire Department members were first on the scene and found a garage fully engulfed in flames. Wind spread the fire to the home. Both were deemed a complete loss.

Occupants and pets were out of the residence and the family is receiving aid from the American Red Cross.

The home as it looked via Google Maps before the fire.

A relative of Tony and Lisa Johnson set up a GoFundMe account online (https://www.gofundme.com/f/help-tony-and-lisa-johnsons-family) and nearly $20,000 had been raised by Tuesday to help the family, which includes three children, three dogs and four ducks.

One donor, Dennis Monson, said he gave money to the cause "because Tony, Lisa and family would be the first ones to help someone in need and now they could use a helping hand."

The cause of the fire hadn't been immediately determined but officials said it doesn't appear to be suspicious.