Rebels bounced from playoffs in upset 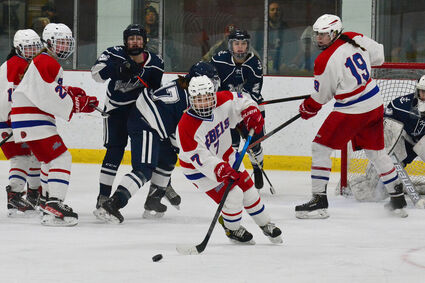 Jorja Jusczak scrambles for a loose puck in front of the Hibbing Bluejackets net Tuesday night in Moose Lake.

The Moose Lake Area girls hockey team wrapped up its season with a tough loss to Hibbing/ Chisholm Tuesday night at home, falling 4-2 in the opening round of the Section 7A playoffs.

The No. 5 Bluejackets started fast in the first period, but MLA fought back. In the end, H/C kept the No. 4 Rebels off the scoreboard in the final two periods.

The first period saw a flurry of activity.

Hibbing jumped up 1-0 on senior Julia Gherardi's 15th goal of the season at 9:08 of the first. Senior Megan Bussey's first of three goals came 44 seconds later to put H-C up 2-0.

The Rebels took advantage of a tripping penalty called on the Bluejacket's Abigail Sullivan when senior Gabby Gamst scored 30 seconds into the power play to cut the deficit to 2-1 at 13:32 of the first. Gamst buried a rebound off a shot by senior Raechel Painovich with a second assist awarded to freshman Sandra Ribich.

With a minute to go in the first, sophomore Megan Hattenberger clanked a shot off the post that found the back of the net to tie the game at 2-2 heading into the intermission. Assists on that goal were given to freshmen Mackenzie Hoffman and Hallie Klavu.

Despite a tie heading into the locker room, the Bluejackets outshot the Rebels 16-5 in the first.

"I thought Hibbing came out fast in the first and caught our girls on their heels," said MLA head coach Reilly Fawcett. "They were on the puck right away and didn't give our girls any time or space. I thought our girls did a great job at fighting back in the first period and found a way to even up the game."

Hibbing/Chisholm got what would turn out to be the game winner at 5:01 of the second period when Bussey scored her second goal of the hockey game and her 11th of the year.

"They came out in the second and got another quick one and then we were chasing the rest of the game," Fawcett said. "It's tough for a team to play from behind and unfortunately our girls couldn't find a way to put the puck in the net in the last two periods."

Bussey completed the hat-trick with a power play goal in the third period at the 6:48 mark. The Bluejackets controlled the final frame, outshooting the Rebels 17-9 and 42-21 for the game.

"We have to credit Hibbing on their discipline in front of the net. That was one area we knew we had to be good at and we just couldn't find the puck in front. We had our share of chances and our girls fought until the end and that's all that we can ask for as a coaching staff," Fawcett said. 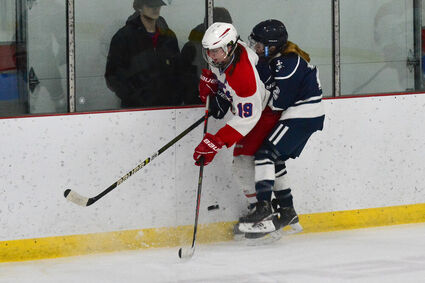 Gabby Gamst works to get the puck off the boards during Tuesday night's matchup against the Hibbing Bluejackets.

Moose Lake Area finishes a stellar season at 18-7-1. Hibbing Chisholm (12-12-2) will meet No. 1 seed and defending Class A state champion Proctor-Hermantown in the 7A semifinals Saturday at 1 p.m. in Virginia.

"Unfortunately, it just didn't go our way tonight. We had a great season and we will miss our five seniors. They were a crucial part of our team and team dynamic," Fawcett said. "It definitely stings, but there are a lot of positives to take away from this season. We had many younger girls step up this year and be a huge part in our success. There were a range of girls who got on the score sheet every game and played big roles on the team.

"Thankfully we have a young team and our younger girls will learn from this and move forward."