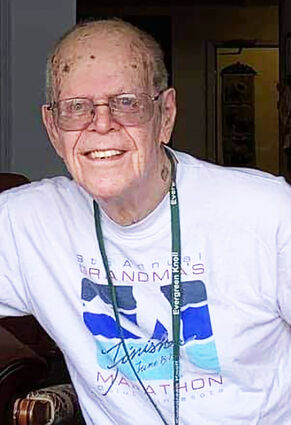 William “Bill” Francis Anderson died peacefully Feb. 16, 2022. Despite having heart problems which began with a triple bypass at age 49, Bill was fairly active and healthy most of his life. He overcame additional health issues over the years, including prostate cancer and bouts of pneumonia. Significant weight loss and other side effects of esophageal dysphagia depleted his strength, and he died two months after his 85th birthday.

Bill was gainfully employed from boyhood through his retirement. His working career began when he was a boy with a paper route. Over the years, he was employed as a summer replacement for Northwest Paper (now Sappi), worked at Roy’s Service Center and Myrt’s Floral, was an AmericInn maintenance man, and proudly served Johnson Controls in sales and management for more than 30 years.

Bill was a member of Queen of Peace parish and served in numerous capacities over the years.

In his younger years, Bill enjoyed drawing, drafting, bowling and fishing, especially his fishing trips to Canada. He loved to play cards with family and friends, and Yahtzee became a family tradition at the Anderson home. (Only one Yahtzee per game … Dad’s rule!) He loved to tell a story, and those who knew him well would groan at his embellishments as he retold a favorite. Dad loved to go out to eat lunch or supper, but supper meant he could enjoy a Manhattan. He loved to “people watch” from his window at his home on 8th Street or from his seat in a restaurant. Dad was very generous and would typically buy dinner for the entire family and any guests they invited.

Bill’s family would like to thank Inter-Faith Care Center for the wonderful care and friendship Bill received over the past six months and St. Croix Hospice for the care and assistance they provided at the end of Dad’s physical life.

Visitation: 2 p.m. until the 3 p.m. memorial service Thursday, Feb. 24 at Nelson Funeral Care in Cloquet, followed by refreshments in the fellowship room.