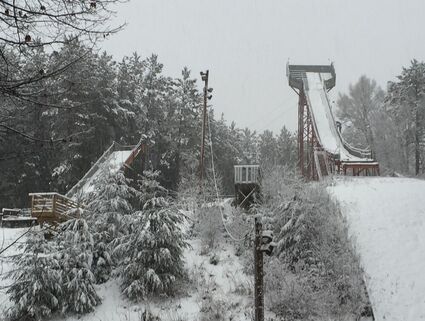 In Cloquet, it isn't farfetched to have Olympic dreams. After all, Olympic Drive snakes around the land Joe Nowak convinced Northwest Paper to donate for a park, now home to ice arenas and a woodland park. Corey Millen and Jamie Langenbrunner played in the arenas when they were Lumberjacks. Millen was the first Cloquet hockey player to reach the Olympics, playing on the 1988 team. Langenbrunner played in the era when NHL players began competing. He was a last-second replacement on the 1998 Olympics team and was captain of the 2010 team.

Drive just a little bit farther to Pine Valley with its trails and ski jumps, which produced two more Olympians.

Patrice Jankowski won three straight state cross country skiing titles in the late 1970s. She admittedly grew bored with just skiing, having been a highly ranked amateur for more than a decade. She became one of the first women to compete in the biathlon, which adds shooting with skiing, when women were first allowed to compete internationally in 1980. She medaled in three national championships before taking a break for her career in medicine. By 1988 she was back in the sport and competed in the 1992 Olympics in Albertville, France. It was the first Games that featured women in biathlon events. She's a hall of fame member in the sport and continues to coach.

Mike Randall was a state champion ski jumper in 1979 and used that talent, combined with skiing, to make the Nordic combined Olympic team in 1984. He still helps judge the local jumping competitions, giving back to his hometown for decades.

Both Randall and Jankowski came from Pine Valley, where the stories and coaches are legendary. It continues today as kids ply the jumps and trails.

What are your hopes and dreams?

The Pine Knot News headed to ski jumping practice at Pine Valley to ask a few possible future Olympians what their "big goal" is for ski jumping or Nordic combined, both longtime Olympic sports for men, with women now able to compete on the jumps but not yet for Nordic combined.

For good measure, we also asked the young athletes what was their favorite part of going to Pine Valley, where there are ski trails as well as 10-, 20- and 40-meter jumps to be conquered. Here's what they said:

"On the 20, my goal is to jump 15 meters and for cross country my goal is to learn how to skate ski. (I like) going on the 20 and practicing and spending time with my friends."

"My biggest goal for ski jumping or nordic combined is being in the Olympics. I like getting to jump and get better and see all my friends I've made there."

"I want to go to the Olympics. I like to fly far."

"I want to go to the Olympics for Nordic combined. (I like) jumping the 40 with friends and finishing a race."

My main goal is to compete at the highest level possible for women at this point. I have goals of competing at the World Cup level in the next few years.

One of my favorite parts of Pine Valley is the Nordic ski course. I have skied many different courses around the country and Pine Valley really is great for both beginner and advanced skiers.

Donate to the cause

The Cloquet Ski Club is holding an online fundraiser now to help improve the ski jumps and grooming equipment there. To donate, go online to tinyurl.com/CloquetJumps.