Commuter bus ferries locals to Duluth and back 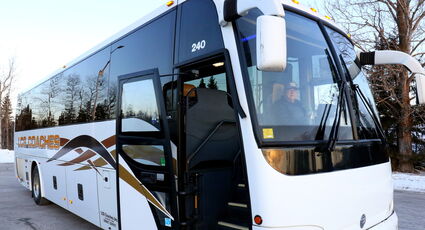 Cloquet-Duluth commuter bus driver Larry Dybvig holds the door open at the Scanlon rideshare parking lot earlier this month. People can catch the bus there at 6:55 a.m. Monday through Friday, except on holidays. One-way fares are $4 and a discounted pass is available. The morning and afternoon schedules and routes are posted at lcscoaches.com.

It could be described as a chauffeur service that takes you to work every day.

The Cloquet-Duluth commuter bus has been making twice-daily trips between the two cities for about 30 years. The service is operated by LCS Coaches in Cloquet and is appreciated by local residents who ride the bus to work in Duluth.

"It started when Don Panger was here," said Jeff Lane, president of LCS Coaches. "It was when the rideshare concept was going on, so we started the Cloquet-Duluth commuter bus option. Another reason why Don created the weekday service was that it gave us another bus on the weekends fo...