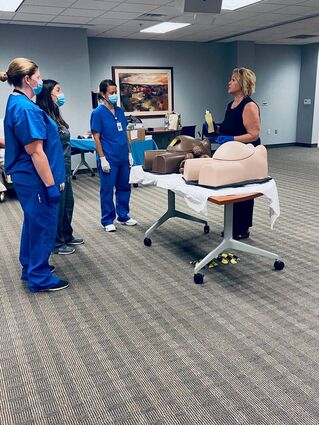 Nursing staff at Community Memorial Hospital (from left, Melissa Seibert, Erika Sixl and Stef Gunelson) train for a cesarean-section birth using birth simulators that can replicate a wide range of birth scenarios from a c-section to a high-risk breech birth.

Virginia is lying on her back in a hospital gown, about to have her second baby.

Virginia doesn't have anything to add to the conversation - because she isn't a person.

She's a life-like birth simulator that can replicate a wide range of birth scenarios from a cesarean section to a high-risk breech birth. The teaching tool is meant to address a vexing, vicious cycle in rural health care.

As young people leave small communities for urban areas, fewer babies are born. And that means there are fewer opportunities for doctors, nurses and other practitioners to keep up on the basic and essential skills needed to deliver babies.

And when that happens, hospitals sometimes stop delivering babies altogether, says Dr. Charles Kendall, who has been in family medicine at the Cloquet hospital for nearly three decades.

Seibert monitors Virginia's vitals on an iPad - heart rate, blood pressure and information about the baby - as she coaches nursing student Kasey Enerson through a normal vaginal birth.

A piston inside Virginia pushes the baby down the birth canal.

"And then when you want to actually help deliver the baby, you're gonna put your fingers under the shoulders, and help the baby out," she instructs Enerson.

The simulator is being used by a wide-range of practitioners from nursing students like Enerson to staff who already work at the Cloquet hospital and don't have much practice in high-risk deliveries.

The simulator allows staff to recreate these scenarios. "Once they do this more and more, they become better at it," she said.

Among the hundreds of babies Kendall has delivered, he's seen few emergency situations - and being out of practice can make doctors nervous.

"You just don't get a chance to practice those or do those. And so that makes docs - any docs, but especially docs in rural areas - nervous about wanting to do it at all," he said.

By the numbers, it's becoming less and less likely that Kendall and his colleagues will be involved in high-risk deliveries in the future.

Twenty years ago, Cloquet Memorial Hospital delivered up to 150 babies annually; last year only about 50 were born.

But even though volumes are low - and births typically don't make money for hospitals - CEO Rick Breuer said it's a critical service.

"We're a large enough community and a large enough health care provider, that we see this as an essential core service that we should be providing," he said, noting that it's dangerous for pregnant women to have to travel far for delivery.

"The farther a mom has to travel to deliver a baby, the worse the outcomes are. They don't keep all their prenatal appointments, there's just more bad stuff that can happen en route," said Breuer.

That's one reason Blue Cross and Blue Shield of Minnesota invested $125,000 in buying the simulator for the Cloquet hospital, said Karen Amezcua, senior director of provider partnerships for the insurer.

"Expectant mothers in rural areas are 9 percent more likely to die or experience life-threatening complications during childbirth, compared to those that are living in the urban areas," she said.

BCBS believes the simulator will lead to better health outcomes for mothers and babies in rural areas, but also better outcomes and more routine care in general, she said.

"Receiving obstetric care in communities allows new mothers and their babies to establish a long-term relationship with primary care in their local community," Amezcua said. "Primary care promotes preventive care and early detection of disease. If we can promote accessing care and entering the system early, we can avoid your long-term health issues." 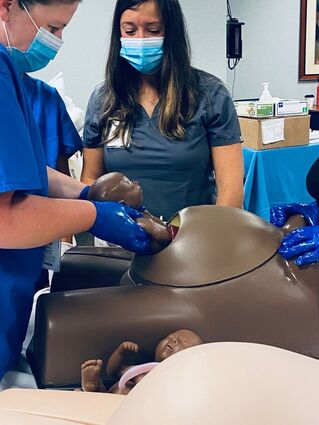 While the simulator has only so far been used by a limited number of people, Breuer said a grant from the state will allow the hospital to offer training at low-to-no cost to a host of practitioners working in rural settings across the region - nurses, doctors, medical students and EMTs.

Obstetrics is a small part of what his hospital offers, he said.

Story by Catharine Richert/MPR News. Minnesota Public Radio News is a news partner with the Pine Knot News. For more stories on of statewide importance, visit mprnews.com. This story originally appeared at https://www.mprnews.org/newspartners/story/2022/02/25/meet-virginia-a-birth-simulator-aimed-at-preserving-rural-obstetrics