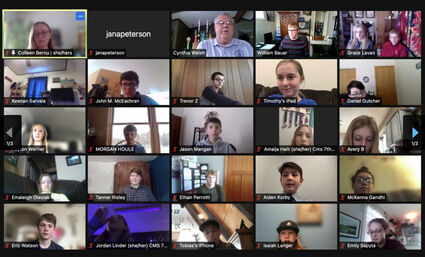 This Zoom page shows many of the science fair students who competed virtually at this year's regional science fair on Saturday, by uploading videos of their projects and answering judges' questions in online Zoom rooms. They logged back in for the awards ceremony Sunday.

Science fair students and judges logged onto their computers and cellphones last weekend as they - once again - attended the Northeast Minnesota Regional and American Indian Science and Engineering Fair virtually.

In a pre-pandemic year, buses and vans would have traveled to the University of Minnesota Duluth from schools as far south as Hinckley-Finlayson and all over the Northland for the regional science fair. Students would set up large display boards in large rooms, ready with an "elevator speech" or a longer explanation of their project for judges during one of two sessions.

This year the students (in grades 7-12) were still divided into two different sessions, but each student was placed in a virtual "room." The judges pop in and out of the rooms in Zoom, listening and asking questions for projects they'd already familiarized themselves with because they were uploaded in advance.

The projects themselves were wide-ranging and unpredictable, but many reflected issues currently affecting the world and its people.

Amaija Halli conducted a survey of her peers and others in an attempt to answer the question, "What effect has Covid-19 had on middle school students' mental health?" Halli found out that the group most affected by Covid-19 was adult females, according to her survey results.

"I expected students to have a higher impact because they weren't used to staying away from their friends," she told the judges, who praised her research and analysis.

Lucia Nelson said she was "jamming out" one day while doing homework, which led to her project, "How music affects learning." Nelson gave 160 high school students a list of keywords to remember while they listened to different kinds of music to test her hypothesis that classical music is best. It wasn't. Kids scored best in the control group (no music), then with '70s and pop music. They scored worst with Broadway music, followed by classical.

Judges were encouraging, but also pressed students to explain what they would do differently. They gave high praise to the intrepid scientists.

Daniel Dutcher looked for the most effective salt mixture in a saltwater battery, because he feels the world needs to get away from using lithium ion batteries, which are not renewable. UMD professor and science fair judge Jennifer Liang was very impressed.

"Batteries are going to be so important for the future," Liang told Dutcher. "Current technologies are going for smaller, but very toxic. In some situations it might not matter how big a battery is. How big was your battery?"

It was the size of a mason jar, Dutcher said, but it could take five or six saltwater batteries that size to power a lightbulb, he estimated.

Science fair participation is down from pre-Covid days: in January 2020, 119 students from 16 schools attended the regional fair. This year the number was closer to 50. But that was nearly double the number from 2021, when only 28 attended the first virtual regional science fair.

A sea of tiny faces tuned in Sunday to see who would get first-, second- or third place to advance to the state science fair or win some special award, ranging from gift certificates from local service organizations and special interest groups such as the American Psychological Association, American Fisheries Society, Duluth Rotary and even the U.S. Navy and Air Force, to the top awards for the best four projects, including a trip to the Regeneron International Science and Engineering Fair (ISEF) in Atlanta this year, which Scott Welsh refers to as the Olympics of Science Fair.

One of this year's ISEF winners, Cloquet freshman Johanna Bernu, said she wanted to look at plants regarded as medicinal by Native Americans and prove it scientifically. She looked at yellow water lilies, which were used as an antiseptic. The yellow water lily does have antiseptic properties, she found.

Why does her research matter, organizers asked.

"We may need to go back to traditional medicines as humans develop resistance to current pharmaceuticals ... in ways that benefit society as well as ecosystems," she said.

Scott Welsh reminded students of all ages to keep track of their awards, and use them in their college applications.

"Plenty of kids list soccer and basketball on their applications, but not so many can list scientific awards," he said.

First place: Rowan Rock, with "Wastewater Treatment: The Use of Mealworm Gut Bacteria (Tenebrio molitor) to Isolate and Identify Bacteria that can Biodegrade Polystyrene." Rock has been advancing her mealworm research for several years, refining her search for the worms' secret to digesting plastic foam to help rid the world of the long-term pollutants.

Second place: Johanna Bernu, with "Disinfectant Properties of Nuphar Advena: An Ethnopharmaceutical Approach." In plain English, she found a plant (the yellow water lily) that Native Americans used as an antiseptic and looked at it scientifically, proving it does have antiseptic properties.

Third place: Grace Lavan with "Effects of the Line 3 Pipeline on Gray Wolves (Canis lupus) on the Fond du Lac Reservation." Last year Lavan looked at whether human interference affected how far gray wolves would move their dens and their pups when relocating. This year she built upon that information and examined how Line 3 affected the wolves, finding that the wolves didn't really change their behaviors as a result of the pipeline project.

Fourth place: Harmony Tracy with "Tough Turkeys Year 2: What habitat types do turkeys now associate with in Northeast Minnesota?" Last year Tracy showed how wild turkeys are extending their habitat into northern Minnesota; this year she found out they associate most closely with aspen and farmland habitat types in the Northland. Observations show they are eating seeds found in cow manure in farmers' fields surrounded by aspen stands, which provide them with food and a place to roost. 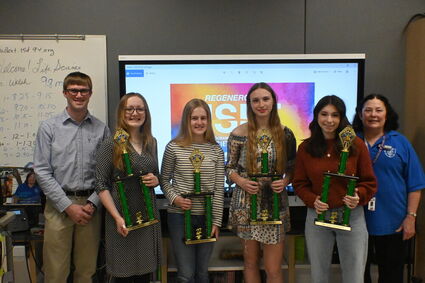