Family has deep ties to Ukraine 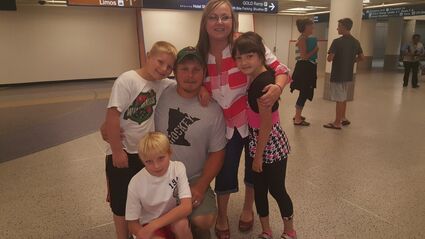 The Purcell family from Cloquet, including dad and mom Craig and Carmen Purcell, their sons Carter and Connor, with a Ukrainian girl named Sonia, who stayed with them for nearly four weeks, the day she flew back to Ukraine in 2016.

A Cloquet family has been living with their collective heart in a knot since Russia invaded Ukraine, worried about the fate of a girl they once thought they would adopt, and a Ukrainian family that instead made them part of their family.

It's a long and complicated story, but Cloquet's Carmen Purcell says she is 14-year-old Sonia's "foreign mother" and she wants the teenager to come and be safe here while war rages in her homeland. Purcell plans to fly to Poland if Sonia can get out, or to chaperone kids for the nonprofit Legacy Refuge.

Because of the ongoing war and uncertain future, the...