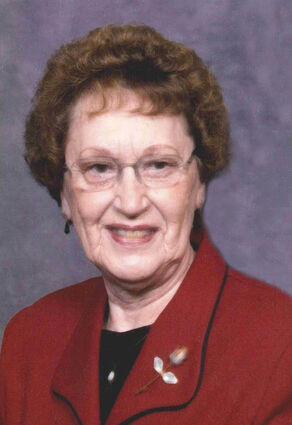 Carol Mae Phyllis (Fossell) Sandstrom passed away March 2, 2022. She was born to Julius and Estella Fossell on May 2, 1932, on a farm 9 miles east of Kennedy. She lived there until she was in the second grade, when the family moved to the Stephen area, where she finished grade school in a small country school. She was the only one in her class, so she was at the top of her class and an “A” student. In eighth grade, she started school in Karlstad and graduated in 1950.

After she finished picking potatoes with her mom that season she moved to Duluth, where she went to business college. After graduating from business school, she worked for Mathisen Tire for four and a half years. While there, she met the love of her life, Turre, and in October of 1955 they were married. He was in college, so they moved to Roseville for him to finish.

They then moved to the Iron Range for a while for his job, and then White Bear Lake. While there, Carol Mae provided childcare for four other children while Turre worked for General Mills. She loved the delicious fresh bread he would bring home every day from work. Three years later they moved to Cloquet when Turre got a job at Northwest Paper, and Carol Mae worked for Skogmo’s. During those years, they had five children, Shirley, Lynn, Devon, Kelly and Kory.

Soon after moving to Cloquet, they bought the Saginaw Store and moved to Saginaw. Turre thought that it would be better if Carol Mae could make money for herself, so she ran the store. In her own words, she “worked her butt off for 20 years” there. In 1985, she closed the store, and in 1989 they moved to their “retirement home” in Saginaw, where she provided daycare for her grandchildren. Finally, she was able to retire and “do her own thing,” which consisted of lots of card playing, bowling, gardening, and “going bumming” around town, often with a grandchild in tow. In 1999, they bought a winter home in Apache Junction, Arizona, where they spent five to six months of each year for 10 years.

Carol Mae was a Worthy Matron of Eastern Star three times, as well as the secretary for some years. Before that she was a Job’s Guardian and Girl Scouts guide. She was also a lifelong supporter of the Shriners.

Carol Mae was a hard worker who cared fiercely for her family. She never hesitated to tell you exactly what she felt, including how much she loved you.

A visitation was planned for 10 a.m. Thursday, March 10 until the 11 a.m. funeral service at Nelson Funeral Care in Cloquet. Entombment will be at Sunrise Memorial Park in Hermantown.