Biochar: it's a better way to burn 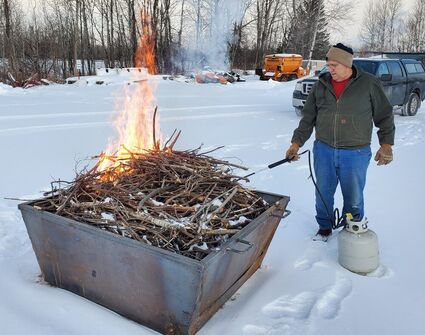 Brad Matlack of the Carlton Soil and Water Conservation District starts a biochar burn during a demonstartion at the Cloquet Forestry Center earlier this month. The result is a charcoal-like residue, at right with a penny shown for scale, that can be used soil for amendments and other uses.

Brad Matlack likes the idea of finding a better way for landowners to burn brush and other biomass from cleanups on properties. In late 2020, the manager of the Carlton Soil and Water Conservation District heard about some money available to let residents experiment with what is known as creating "biochar." In a nutshell, it's method of high-heat burning that creates lower emissions into the atmosphere while leaving a charcoal-like pile that research has shown could have beneficial resources for soils, water filtration and even livestock use.

Matlack said oftentimes his district advocates and helps landowners in clearing property of trees for fire safety or mitigating diseased or nuisance wood plants. The resulting piles are hard to just haul away, and often they are burned, bonfire-style.

Biochar is a way to bring some value from what often goes as waste in fires that pollute. "It's an option to burn cleaner and use the ash," Matlack said.

He found funding to get two experimental bins, or kilns, created in order to present demonstrations to landowners. The kilns were created from blueprints of other projects that were used by students at Cromwell-Wright High School. The vocational students manufactured two bins that Matlack has been experimenting with, most recently at the beginning of the month at the Cloquet Forestry Center.

The key to biochar is high heat created by a lack of oxygen in the bottom of the kiln. The temperature creates a different kind of flame, one that burns the emissions that come from the burning wood.

"It really is a better way to burn," Matlack said.

The difference has been quite visible in the demonstrations, he said, with witnesses noticing the cleaner flames.

The burn is stopped at a certain point when the fuel is reduced to what one might compare to charcoal, or even coffee grounds. That product is brittle and can be crushed in different dimensions depending on its use.

Matlack said the biochar can be used to safely amend soils, create filtration in wet areas, be used for animal bedding to soak up waste, and even be put into feed to help animals with digestion. The key benefit is keeping the carbon that is usually released in uncontrolled burns, creating less pollution and keeping it in the horticulture on lands. 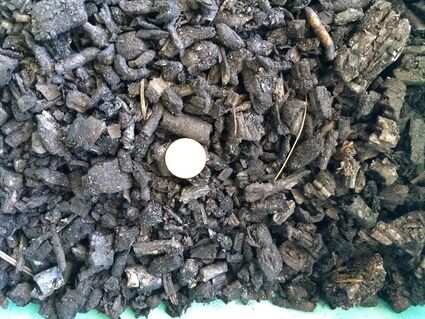 The result is a charcoal-like residue, with a penny shown for scale, that can be used soil for amendments and other uses.

Studies are ongoing, such as those in Duluth at the Natural Resources Research Institute. The focus has been on commercial use of biochar, often on a large scale with huge kilns. Matlack said he is seeking a way for the technology to be used on a "landowner scale," with some apparatus that is portable.

He plans more demonstrations and will depend on word spreading about the burn option. The future could include renting out the kilns for burns, he said.

"We've proven that it can work," Matlack said. Now it's a matter of getting it into the hands of landowners.

It will complete a cycle that the conservation district advocates. It works with county residents on timber stand improvements, invasive species control (think buckthorn and trees infested with pests), and improving soils and water filtration. All of that could be done with the biochar being created and used on the same property, Matlack said.

"It's a different way of doing things and we're trying to make it available."