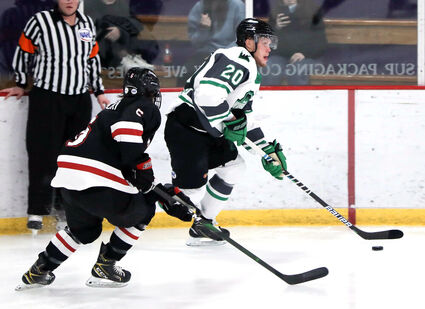 Minnesota Wilderness's Will Persson controls the puck in the corner during a game earlier this season. Persson scored the game winner in the third period Thursday night.

Niko Rexine scored twice and Will Persson added a goal and an assist in leading the Minnesota Wilderness to a 5-2 victory over the Springfield Jr. Blues Thursday night, March 31.

A tight one-goal game going into the 3rd period opened up when Persson scored what resulted in the game-winner 3:06 into the frame. After getting a pass from Max Neill, the veteran from Bjorklinge, Sweden, sprung through on a break along the left wing wall, and fired a shot that sailed over the glove of Springfield netminder Aksel Reid and into the net. The goal was Persson's team-leading 20th of the season.

The scoring play was almost a carbon copy of a play which led to Rexine's first goal in the first period. On that play, Persson also broke in on the left on a pass from Neill, but Reid ended up making the save on Persson's shot yet could not control the rebound as the puck slipped to his left, where Rexine was positioned to jam into the net. That made the score 2-1 with 1:31 remaining in the opening frame.

The 2-1 score remained through the end of the 2nd period. The middle frame was kept scoreless with the Wilderness (32-21-2) controlling most of the play, outshooting the Jr. Blues 10-2.

Minnesota extended its lead to 4-1 at 7:49 into the 3rd when Rexine scored a short-handed goal on a beautiful two-on-one set up by Gunnar Thoreson. With two goals, Rexine now has 17 on the season; his 58 points lead the team and are 2nd among NAHL rookies.

Springfield (34-18-3) climbed a little closer on a goal by Hayden Riva, with a slap shot with 9:21 remaining. The Jr. Blues then pulled Riva with 3:30 left for an extra attacker, but would not get any more past Wilderness goaltender Matt Smith. Instead, with 1:19 remaining, Jared Mangan broke through with a hard fought empty-net goal. With the puck loose in the slot in the Springfield zone, Mangan dove past a defender, and while on his belly, swept the puck into the open Jr. Blue net to make it 5-2. The goal was Mangan's 6th of the season and 15th point in 15 games with Minnesota.

Also lighting the lamp for Minnesota was Ren Morque, who opened the scoring in the first period shortly after a Wilderness power-play, with his 2nd of the season. Springfield then tied the game on a power-play goal by Zach Bade with 2:39 remaining in the frame. That was followed by Rexine's first goal just 1:08 later.

Despite being outshot 11-8 in period 1, the Wilderness managed to outscore Springfield by a 2-1 margin. The Wilderness would then outplay and outscore the Jr Blues the rest of the way, with a 23-10 shot margin and 3-1 score for the final 2 periods.

Smith earned the win in net, making 19 saves, and improved his Wilderness record to 11-1.

Reid's loss snapped a 3-game winning streak, as he stopped of 26 of 30. The rookie from Minneapolis saw his record fall to 8-4-1.

The same two teams take to the ice for the conclusion of their 6-game regular season series Friday night. Puck drop at Northwoods Credit Union Arena is scheduled for 7:15p.m.