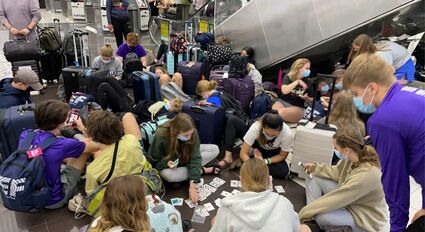 30 Cloquet High School students and five staff members and chaperones found themselves unexpectedly stranded in Miami from Sunday through Wednesday, when the second leg of their return trip from Costa Rica was canceled with no explanation. The group bided its time at a hotel and in the airport.

A group of local students and staff got caught up in a wave of flight cancellations last weekend, when bad weather, a glut of travelers, and staffing and technology issues caused more than 10,000 U.S. flights to be canceled or postponed.

That meant 30 Cloquet High School students and five staff members and chaperones found themselves unexpectedly stranded in Miami from Sunday through Wednesday, when the second leg of their return trip from Costa Rica was canceled with no explanation.

CHS Spanish teacher and trip organizer Lisa South said she knew the flight had been canceled before they left the Central American country Sunday, but the tour company had hoped they'd be able to get the group on another flight the same day.

Instead, they ended up spending more days in Miami before getting booked on four different flights to the Minneapolis airport throughout Wednesday.

"Most of us will be getting back to Cloquet in the wee hours of the morning Thursday," South told the Pine Knot News in phone interviews this week.

During one call, Smith was interupted when hotel keys quit working unexpectedly Tuesday.

That was all part of the saga of rebooking hotel rooms on a daily basis while they waited to get a flight home, and found ways to fill three extra days of vacation that weren't part of the original plan or budget.

The students, not surprisingly, took it in stride.

Senior Katie Turner stated the obvious: "There are worse places to be stuck than Miami."

Classmate Kate Conway said the extra days helped make up for waiting two years to go to Costa Rica, after the 2020 trip was canceled because of the Covid-19 pandemic. She asked to be on the last flight out of Florida, according to South.

"I love Florida, so why not make the best of it and enjoy our time here," Conway said.

Adjusting to the delay was a group effort. South said those who purchased travel insurance were able to get hotel rooms because of the delay, which benefited others who hadn't bought the extra insurance. The tour company - Education First Tours - helped too.

Chaperones made almost daily trips to Sam's Club to buy food for breakfast and lunch each day; they designated one room for snacking and gathering each day, South said. The tour company helped arrange a bus tour of Miami. South put a group boat trip on her credit card. Meanwhile parents and many people responded to a Facebook plea by sending donations to help cover the extra expenses. 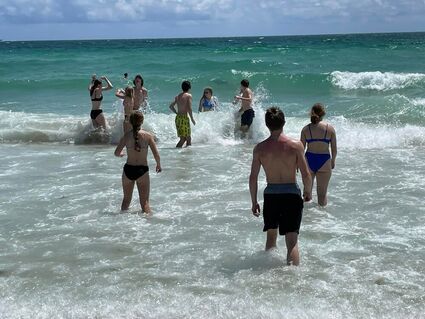 "A lot of my past students that have been on trips with me sent money. It touched my heart," South said. "That made things really nice. Now we have plenty of money and whatever we don't use, we will reimburse people for expenses, like those $7 bottles of water while we were waiting all day at the airport Sunday."

Once they adjusted to the idea and got out of the Miami airport, it turned into a bonus vacation, Turner said.

"We've all stayed in great spirits and everyone has been so kind to accommodate us on this wild adventure," she said.

Her mom, Bobbi Turner, added a thank-you to "the family, friends, and community members that sent us donations so we could take them out of the hotel to make the most of this."

As they wrapped up their extended travels this week, CHS sophomore Grace Swanson summed up their adventure in two words - pura vida - a Costa Rican phrase that embodies the spirit of the people to "enjoy the moment, life is good."