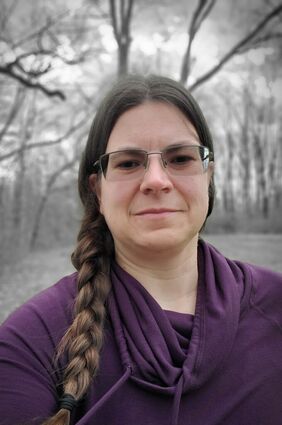 Prosen told the Pine Knot that she was inspired by St. Scholastica professor Dr. Donna Schroeder when she was working on her biology degree.

“I was a TA for her and the idea of helping others to learn science and be able to understand things was always sort of in the back of my head,” she said. “But the idea really started in sixth grade in Cloquet. We were dissecting worms and my lab partner said, ‘you know this so well you should teach.’”

Prosen is a teacher at Gill St. Bernard’s School in Gladstone, New Jersey, a private pre-K through K-12 school with a 208-acre campus that includes a working farm and garden. She teaches pre-K through fourth-grade science there as a science specialist. She said the remarkable campus allows them to do amazing studies. “We have not only the farm, but a pond and streams. We’re building a robust environmental education program going from the elementary school upward.”

As part of her award application, Prosen submitted a third-grade science lesson about heredity and inheritance using the sheep at Home Winds Farm as the model organism. Home Winds is a working farm that serves as an outdoor classroom for the school.

“This lesson was designed for students to observe, collect, and interpret data to provide evidence that animals have traits inherited from parents and that variation of these traits exists in a group of similar organisms,” Prosen explained in a school press release. “The Jacobs and Cormo sheep have specific traits that are easily observable. The Third Graders took note of the horns, wool color, and other traits and were able to trace specific traits back to the parents.”

Prosen is the daughter of Robert and Louise Jones of Cloquet.

The longtime teacher said she was honored to be chosen. “As a national award, you don’t know what other people are putting out there,” she said.