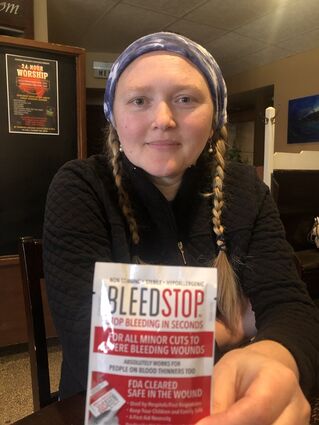 Galyna Tuttle moved to the U.S. from Ukraine with her husband 16 years ago, but her family and friends are there and they have shared many stories, and told her of urgent need for medical supplies especially. She hopes to travel there in May with suitcases filled with as many supplies as she can carry, including BleedStop, a coagulant made in Minnesota.

Carlton resident Galyna Tuttle didn't cry when she told the story of the young boy who bled to death in her native country of Ukraine, because she's all cried out after hearing and reading and talking about the horrors of war. Tuttle doesn't live there anymore; she moved to the United States with her husband, Andrew, 16 years ago.

She's still shocked that there is even war in her country, and that shock has been multiplied many times by what has happened since Russia invaded. It's a world away from her job at the Common Ground Coffee Bar & Deli in Cloquet.

"Even before the war, when there were rumors, people were asking me if I was afraid and I told them, 'We live in the 21st century, stuff doesn't happen like that where one country attacks the other country just because they're bigger and stronger.' So I was not afraid."

She remembers the exact moment, as she was heading to bed on Feb. 24, when her husband told her the news was saying Ukraine was being attacked by Russia. She called her mother. No answer. She called her brother, who said they were OK at his house. She called a friend who showed her people outside, heavy traffic leaving the city, people lining up at banks and grocery stores.

"I didn't sleep that night, I was up making calls, watching the news and videos," she said. "I was trying to call people but they weren't answering, it was just chaos."

She did eventually reach her mother, who is OK. "Nobody is safe in Ukraine right now, but compared to the frontlines, she is relatively safe," Galyna said.

She has many family members and friends who are still in central Ukraine. One of her two brothers has been working daily to bring food and water to people. He opened his rural home to 27 people fleeing Kyiv in the early days of the war. "My nephew called and asked if he could bring his family there, and a coworker's family. Then a few minutes later he called again about a different coworker ... my brother said they immediately started building pallets so people wouldn't have to sleep on the floor." Her other brother tried to get his family out of Ukraine, but had to turn back and they are now living with her mother in the countryside.

While cellphones have made it easier to talk to people in the midst of war and hear their stories, it's not as easy to get food, medicine or other supplies overseas.

The Tuttles are working on that.

Galyna and Andrew have been doing what they can since the war started, and even before.

In 2018, they started Eleventh Hour Ministries, a nonprofit that helps support Ukrainian widows and orphans, especially orphans who are aging out of the state-run system and often end up on the streets. They also work in Kenya. Run by volunteers, donations are not used for any administrative costs.

When the war broke out, they worked to help as many of the folks they were helping get out of the country. A Romanian friend in southern Minnesota said they could send some families to his home in Romania; they found safe passage to the Czech Republic for a woman and two younger girls. They've also been sending money for food, which is purchased in Romania and brought into Ukraine for refugees.

She shares video of bullet marks on a van used to bring the food, and a photograph of half a dozen people killed by Russians, one with his hands tied behind his back, brother of a minister she knows in Ukraine.

After hearing many terrible stories over the past eight weeks from family and friends who still live in Ukraine, and learning of the tremendous need for medical supplies from her niece, a doctor in Ukraine, now they're collecting money and donations of medical supplies.

"She called and she was very disheartened, because a lot of people are dying from blood loss," Galyna said, sharing the story of the boy who bled to death, and another of a mother who barely survived. If they'd had supplies, things would have been different, her niece said.

"The tragedy of this war is that so many civilians are dying, women, children, I think even more than the soldiers," Gaylena said. "Medical supplies like this are so valuable, like gold. I don't think I will advertise what I'm carrying."

She slides a package of BleedStop, a powder made in Minnesota - and promoted by MyPillow's Mark Lindell - across the table. Like similar products, it contains a combination of iron sulfate and basically cornstarch, and is available over the counter as well as online. She's hoping to personally take many boxes of the coagulant along with other needed supplies to Ukraine, via a yet-to-be-determined route through a border country in early May. It's much quicker than shipping them, which can take months and isn't reliable anyway.

Although it's been challenging living here with her family so far away and in danger, Gaylena said she's seen acts of kindness exceeding even "Minnesota Nice."

"I want to thank family, friends, neighbors, church friends and more for their support," she said. "People are so thoughtful and caring, with cards and calls since this starting, people asking about my mother, stopping by. It means a lot."

• Financial or medical supply donations for Eleventh Hour Ministries are being accepted here: 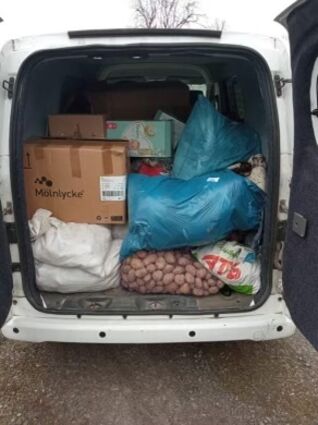 Food purchased in Romania fills a truck bound for Ukraine, paid for with funds raised here by 11th Hour Ministry.