When basketball was king ... almost 60 years ago 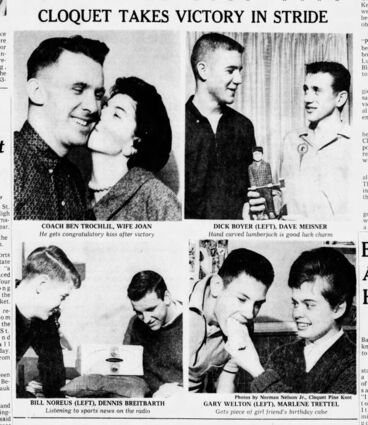 The Minneapolis Star printed pictures of Cloquet players, the coach and fans provided by the Pine Knot of 1963 as the team headed to the state tournament as a favorite. Papers across the state, as seen these clips, covered the team, as basketball, and its one-class tournament, was the talk of the state every March.

It was a love affair. It's the only way to describe how people from Cloquet and the surrounding communities embraced the 1963 Cloquet High School boys basketball team. Basketball was king in Minnesota and especially the region then. It was before the hockey barn was built, Pine Valley was a relatively new ski facility, there wasn't girls' sports, there were no cellphones or ESPN, so it meant there were a lot of people going to local gyms on Friday and Tuesday evenings to get a sports rush.

Cloquet went to the state tourney in 1958 and 1962 and Carlton in 1959. These were the years of the one-class Minnesota State high school basketball tournament, so schools like tiny 1960 champion Edgerton (961 residents) could be pitted against large Minneapolis schools or even 1961 champ Duluth Central.

The 1963 Cloquet tourney team was fast-paced with a mostly diminutive lineup. It ran a full-court press that ran teams aground. They became local fan favorites as well as a tourney favorite.

How big was basketball? There was a waiting list for season tickets to Lumberjacks games.

In 1963, Cloquet had a new coach, 29-year-old Ben Trochlil, and two returning all-tournament state basketball players in Dave "Mouse" Meisner and Mike Forrest. The large Cloquet gymnasium was filled to capacity (over 1,200) for each game and was especially loud for arch rival contests against Duluth Central and Proctor, both handing the 'Jacks their only regular-season losses.

The Cloquet marching band, cheerleaders and majorettes made the gymnasium come alive with pomp and circumstance. The Cloquet band won the Minneapolis Aquatennial competition three years in a row in the late 1950s. At games, they marched double time, like the team, and engaged the crowd during the game and at halftime.

Cloquet escaped through the district and regional tournaments with some thrilling victories and made it to the state tournament again in 1963. Their first game was against the another tournament favorite, Bloomington. Cloquet shot the lights out, winning by 15 points. Their shooting fell off a little in Game 2, but still a tournament record was set for most combined team points in a game in a close, hard-fought battle over Sauk Centre, 87-81.

Cloquet was the favorite in the championship game against an unheralded Marshall team. In what many basketball pundits call the greatest Minnesota high school championship game ever, Marshall won by one point, 75-74, in front of more than 18,000 at Williams Arena.

Two players from teams that played in state tournaments in the 1960s arranged a reunion for all players of the era during this year's tournament in Minneapolis. Howard Lavick, a 1964 Cloquet grad and designated "biographer" of the 1963 team, attended.

Lavick presented a video and historical recollection of the 1963 adventure a few years ago. He was the former director of the film school at what became Loyola Marymount University in Los Angeles. Now residing in Oregon, he is still looking for any home movies, pictures, newspaper clippings, pins, or other artifacts or documentation that Cloquet residents may have stashed away from this memorable season.

Contact the Pine Knot, at [email protected], if you have anything you'd like to share with Lavick. Next year will be the 60th anniversary of this historic Cloquet season, and the love affair continues to flourish.

A special high school basketball reunion was held in Minneapolis March 23-24. It gathered former players from the Minnesota state tournament teams of 1960-70, the last decade of the one-class system whereby any high school out of more than 450, no matter how large or small, could win the entire state championship. Heady days indeed.

The reunion was put together by former hoop stars Jeff McCarron from Sherburn, Class of 1970, and Drew Kindseth from Marshall, Class of 1970.

Cloquet’s representatives included players Dave “Mouse” Meisner, Mike Forrest and Bill Noreus from the 1963 state tournament team, joined by team manager Bruce Rimstad, and coach Ben Trochlil, who guided the team to the 1963 state finals against Marshall in a contest that has been billed as the greatest championship game in the entire history of the state tournament.

On Thursday morning, all of the players who could make it assembled on the basketball court at Williams Arena, where the tournament games were played, often to crowds of 18,000 or more. Those three days in March were Minnesota’s version of March Madness long before it became the moniker for the NCAA tournament.

For the Cloquet team members and Terry Porter from the championship Marshall team, it was a special reunion.They greeted each other with heartfelt friendship and respect that has endured through the years since that fabled 1963 season.

Realizing that it has been nearly 60 years and aware that failing health is taking its toll, these friends gathered with the bittersweet understanding that this may perhaps be for the last time. But because of this reunion, set specifically for three days in March — echoing the tournament games of years ago — these players once more shared in the joyful exuberance of their youth. Heady days indeed.