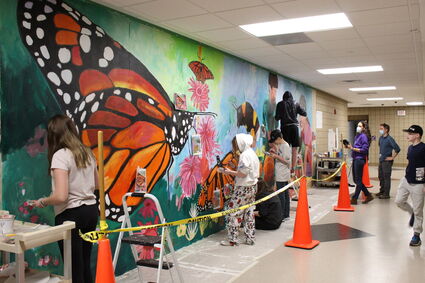 A giant butterfly dominates one end of a Cloquet Middle School mural that is a work in progress. Pictured here, CMS students paint a mural they and their classmates helped design with guidance from artist Adam Swanson and art teacher Andrea Cacek.

While gray days dominated the month of April outside, art students at Cloquet Middle School were creating a scene of spectacular color and warmth inside a second floor hallway.

Like a garden, the mural wasn't created overnight. First, the students learned about bees and pollinators from the NE Minnesota Beekeepers Association, then about food sovereignty and how there are foods for every season available right here. They read about pollinators and their importance to plants and animals, and brainstormed ideas to help the bees and the butterflies.

Next, they put pencil to paper to come up with images that would help express some of the things they had learned, drawing the native flowers, butterflies and the rusty patched bumblebee, a now endangered bee native to North America.

CMS art teacher Andrea Cacek and others lined up the speakers and applied for grants to help fund the project and bring artist Adam Swanson to work with the students to compose the actual mural.

They even made a movie about the process. "Did you know that honeybees pollinate 70 percent of our food? They are vital to life on our planet," says the narrator of their six-minute movie.

One box at a time

Swanson - who has his own massive murals stretching across outdoor walls in Duluth - prepped the mural base at his home studio in rural Carlton County with some help from his two young sons, one a CMS student. He then mounted the treated fabric to a temporary wall inside the school.

Next, they marked the wall into 1-foot by 1-foot sections. "That took two days," Swanson said.

Then the students started drawing, using 8-inch by 10-inch color prints of the mural image that were also marked by grids as their guide.

"When the students came, if they were overwhelmed, we just said, 'how about you work on this square here, row 12, fourth one up?'" Swanson said. "So then they just went to the square and usually, 99 percent of the time, they went all around the square too."

Last Monday, the kids began painting over those lines, rather quickly creating a massive work of art, one square at a time.

Although he is a well-known local artist, in this situation Swanson is more of a teacher and facilitator for the mural. It is the students - and even a few community members - who are the artists. Swanson said "hundreds" of kids have had a hand in painting the mural.

They come in small groups so things don't get too chaotic, find a space they want to work on and get palettes, paint and brushes.

"Everyone, there's really no way to mess up. The best thing about paint is if you make a mistake, you can wait a few minutes and cover it up," Swanson reassures them. He also encourages the kids to step away from the wall every few minutes, to get a different perspective.

Cacek said it's nice to see the kids work with Swanson in small groups. "It's so fun to see them pull out their mixing skills and experiment, try new things," she said.

Most of the students are quiet and focused as they work, some sitting on the floor, others standing, one higher up on a ladder, trying to mix the colors of the face just right.

Once it's finished and covered with varnish to keep it safe from the elements, and people, the mural will be placed on a wall outside the CMS swimming pool, above a pollinator garden that other middle school students are planning, with more help from the Carlton Soil and Water Conservation District, and planting when the weather gets warm enough. It will take at a few days of temperatures above 65 degrees before the new art can be relocated outdoors. 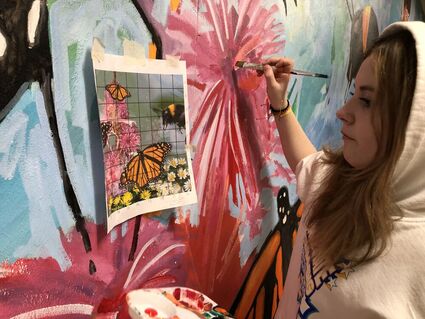 Sheena Fierst paints a flower in shades of pink and magenta, using a photo of the mural prototype as her guide.

Cacek said she likes the idea that the mural will hang outside the school for years, bringing art to a place where it can be seen by students and others coming and going from the school, even by people driving by on Washington Avenue.

New buildings are nice, but it takes more, said the art teacher.

"It has to be about the people that are in the building, too," Cacek said. "So when I see this, I think, 'Hey, they said we could do this.' You're honoring the students. They're important too. It's not just about the place to go to to learn. It's theirs. It belongs to them. It makes me happy."

Want to know more? Watch a movie about the mural process at http://www.youtube.com/watch?v=zZyP5cJxTlw. And look for the new mural outside later this month.