Prior to winning the state championship last Wednesday, April 27, members of the Cloquet High School Econ Team ran past cheering crowds in the hallways of the high school ... dressed in two-piece suits and carrying giant binders filled with study guides. The school did everything it normally does for a sports team bound for state, even providing a police escort (school officer Elijah Haglund, who jogged down the hallways behind them).

Then the team got down to business, pulling up chairs around a table inside a soundproof study room, where they competed in a virtual championship quiz bowl against the economics team from Cambridge.

Thus, Cloquet's latest state championship team was crowned - not at the usual site of the Federal Reserve Bank building in Minneapolis thanks to Covid-19, but in the school library.

Although there are four students on the state championship team, the "econ team" is really made up of eight seniors. They've been studying together close to seven weeks now, with help from coach Tim Prosen and a ninth team member: popcorn.

The teenagers formed their own teams at the start of the season, Prosen said. Team 1 - with members Cale Prosen, Jake Mertz, Amelia Allen and Sam Buytaert - are the new state champions. Team 2 is made up of Ilei Benson, Emily Vermeersch, Olivia Jameson and Lydia Stone.

The two Cloquet teams placed first and second at sections, which was also online. Each team member took a 30-question test with 10 questions on microeconomics, 10 on macroeconomics and 10 on international economics and current events. The top three scores for each team were compiled into a team score to determine the section winners. At state, section winners had to take another test for a semifinal round. The top two teams advanced to the quiz bowl round.

Teams have to answer questions such as: "What was the precursor to the World Trade Organization?" or "The Dow Industrial Average is based on how many stocks?" or even tougher: "If we're in a contractionary monetary policy, what will the federal open market committee do?"

Looking at top section scores from around the state, Prosen said Cloquet's second team would have placed third at State if the rules allowed more than one team from each section to advance.

But they don't. That left Team 2 standing outside the windows of the study room during the online championship - looking on like "pigeons," Prosen said - waiting for signs of triumph or defeat.

"You guys need to be more emotional next time so we can tell," admonished Team 2 member Lydia Stone during an interview last Thursday.

"Yeah, we only had a couple of [head shakes] and one of Caleb's fist pumps," added teammate Oliva Jameson.

Meanwhile, their coach paced the hallways and even lay down on the floor of the library at one point, he was so on edge. "They wouldn't have let me do that at the Federal Reserve," he said.

For coach Prosen, the state championship was an even bigger deal than in years past and part of the reason he came back to coach: the team includes his oldest son, Cale.

"I did it for everyone else's kids, and he's always been interested; and, of course, I knew this whole group here. I thought, well, I don't want to not coach these guys."

The joys of Econ Team

All eight kids and their coach continue to study together nearly every night - going from school, to track, to the store and into the Family and Consumer Sciences room where they eat and study until after 9 p.m. - just like they have all season long. The binders they carry are their econ bibles, each weighing in at close to 10 pounds and filled with previous tests and competition quiz bowl questions. "I literally sat in competitions and wrote every one down because you can't do anything electronic, just to give every edge to our kids," coach Prosen said. "So I got years and years of questions."

The kids also learned more than econ facts in their six weeks of study. They learned some food skills in the FCS room; they can now make stir fry, eggs, and virgin pina coladas. More importantly, they learned how to clean up after themselves. Although the meals varied, the consistent factor was the obligatory garbage bag filled with popcorn, courtesy of Buytaert's job at Cloquet's Premiere Theatres.

It's true. Popcorn did go to prom. Popcorn was also featured in the Econ team movie, a pumped up affair, made prior to their state win and available for viewing on Instagram, @cloqueteconteam.

A quick survey of the group last week reveals a variety of reasons for joining. There were team members who joined because their older siblings were on the team (Stone) and others who are the first in the family (Vermeersch). "And I wanted to learn more," Stone said. "I felt like this is stuff you can carry over into your future." 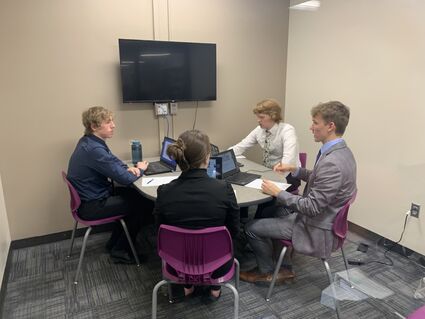 Members of Cloquet's Econ Team 1 compete in a virtual quiz bowl against the Cambridge economics team for the state championship last Wednesday. Pictured clockwise from left are Jake Mertz, Cale Prosen, Sam Buytaert and Amelia Allen. Members of Econ Team 2 were cheering them on outside the study room.

Jameson came for the food and because of peer pressure, and found she liked it. Buytaert said he'd like to study accounting "so it's kind of my thing and it's even better because all my friends were doing it." Vermeersch now wants to major in economics at college.

Mertz said he joined because he enjoyed economics class and had been in Knowledge Bowl before. And for Cale Prosen, well, it runs in the family. "I've just been around the team forever with my dad being the coach; it's just something I always wanted to do," he said.

"Or, to put it simply, we're just a bunch of nerds," Buytaert said.

" ... who wanted to learn about inflation," Stone added, before the whole group started riffing again on the joys of the Econ team.

Next week, Team 1 will take a 45-question test with 15 questions on microeconomics, 15 on macroeconomics and 15 on international economics and current events. They have to win the Upper Midwest region to move on to a national semifinal, where they would do an economic case study.