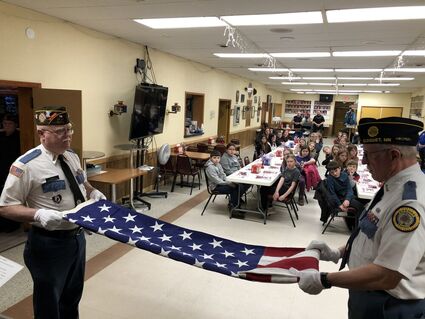 Esko and Cloquet school patrol members observe as Richard Chasse (left) of the Cloquet VFW and Steve Birkemeyer of the American Legion fold the American flag while Honor Guard captain and DAV member John Prouty read the meanings behind each fold.

Nearly 40 student patrols from Winterquist Elementary School in Esko and Washington Elementary School in Cloquet got a big thank-you from local veterans organizations Monday for a job well done. Each patrol member was presented with a certificate signed by the VFW commander and auxiliary president and a silver dollar, and they got to enjoy all the Sammy's Pizza they wanted with their fellow volunteers. They also learned about the American flag and the prisoner of war display during their visit to the Cloquet VFW. Missing from the annual pizza party this year were patrols from Churchill Elem...