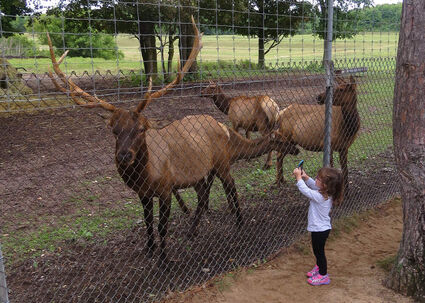 Captive elk stand behind a fence in Gaylord, Michigan, home of a city elk park.

Chronic wasting disease is spreading in deer farms and, to a lesser extent, among wild deer in Minnesota and across the country.

While there has been no CWD documented in Carlton County, a positive case in the city of Grand Rapids in March, and issues with a Beltrami County farm last year, have the Minnesota Department of Natural Resources looking at a statewide approach to disease surveillance, management, control and education.

The fatal neurological disease affects the cervid family - deer, moose, reindeer, caribou and elk - and causes degeneration in the brain. It is highly contagious and there is no treatment.

This week, the Carlton County board of commissioners set a public hearing for 4:15 p.m. June 27 at the county transportation building to discuss a proposed one-year moratorium on the creation or expansion of captive cervid game farms in Carlton County. The St. Louis County board has passed a moratorium on such farms, and moved earlier this week toward a permanent ban on captive elk, moose and deer herds.

Carlton County officials said a moratorium would provide time to study the issue and create a proposed set of possible regulations.

There is only one existing game farm in Carlton County, an elk farm operated at Lake Venoah Community boarding and lodging south of Carlton. Incidence of CWD in deer and elk farms occurs in Minnesota at around 1 percent while in Wisconsin has in some areas an incidence as high as 30 percent.

Robert Gorecki, who works with the DNR's CWD deer farm enforcement, addressed the county board at its May 3 meeting. He said each deer-game-farm CWD incident costs about $500,000 to contain and eliminate. He said there are at least 160 documented escapes of animals from some Minnesota deer game farms with 30 percent cited as violations.

Gorecki said 380 deer had been shipped out of Wisconsin deer farms to all parts of the country, including Minnesota, and some of the animals later tested positive for CWD.

There now are eight areas spread across Minnesota, from north to south, where CWD has been found in wild or farmed deer. Infected deer have been found in the Camp Ripley area, Grand Rapids and Beltrami County, and there was a major outbreak in the southeast corner of Minnesota where both game farm deer and open-range whitetail deer were killed and safely disposed of. In Beltrami County, a farmer dumped CWD-positive deer carcasses on an open field, 100 miles from Carlton County.

The Fond du Lac Band is in support of the moratorium and increased regulation for the safety of wild deer, elk, and moose.

"Unfortunately, captive cervid farms can act as an incubator and vector for the spread of CWD," Band officials said in written testimony to the board. "Increasing evidence shows that the disease is spreading between captive cervid facilities and the wild cervid population. Concentrating deer and elk in captivity increases the likelihood of direct and indirect transmission. This can occur through the transportation of cervids, cervid carcasses, or biological materials from unknown but infected cervid farms to non-infected cervid farms; or from the consumption of prion-contaminated water, soil, or food that can spread into or out of fence lines."

Last year, the band submitted a proposal to the DNR to expand the state's wild elk numbers and range by moving 100 to 150 elk from existing herds in northwest Minnesota to the area of the Fond du Lac Reservation and Fond du Lac State Forest in Carlton and southern St. Louis counties starting in 2025. It is awaiting approval of the plans by the DNR, but worries about CWD are paramount.

"Without changes in law and policy, our current approach to CWD perpetuates harm to the sustainable economies and overall health of Minnesota" the Fond du Lac letter stated. "That is why it's important for leaders at the county level to step up and adopt ordinances that will protect the state's wild cervid population."

Although the proposed moratorium would not directly affect hunters, Craig Engwall of the Minnesota Deer Hunters Association also spoke at the board's May 3 meeting. The association has generally backed any measures to get CWD under control in game farms but cautions pinning the CWD on wild deer and crimping the practice of deer hunting.

Engwall said deer hunting has been a way of life for many Minnesotans since the pioneer days. He felt that his group has positively helped form legislation and department policies that protect the freedom to hunt. In northern Minnesota, deer hunting also provides a strong economic boost for the whole area, he said.

Board chair Gary Peterson commented via phone that it does not hurt to study the CWD situation during a moratorium. He pointed out that the health of the wild deer population in our area affects those that hunt and eat their game, but also can adversely affect our local economy.

While counties deal with the issue, bills about cervid farms in the current state legislature continue to be debated.

In an interview last week, James Jauss, owner of the Lake Venoah elk farm, said he didn't want to take sides on the issue. As an existing farm, Jauss would only be prevented from expanding during a moratorium. Not a problem, he said.

"I have run an elk farm for 25 years and have not introduced any new stock into my herd for the last 20 years," he said.

He said he was disappointed that only the DNR, the Minnesota Deer Hunters Association, and the Fond du Lac Band were represented at the meeting to express views. Jauss said the Minnesota Board of Animal Health has the ultimate jurisdiction over his elk farm. 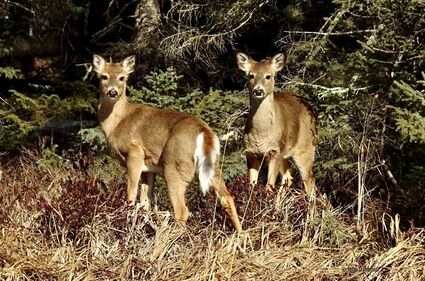 Last year's fawns will soon be on their own because the doe will be having this year's fawns soon, suggested photographer John Dahlman, who snapped this photo recently along the back roads near Floodwood. Northern Minnesota has mostly avoided chronic wasting disease, but it is spreading across the state, and both local and statewide government officials are being proactive.

The board of health sends a veterinarian to farms once every two years to test animals, check tags, check his paperwork, and make recommendations, Jauss said. In the off years the local vet comes and checks his herd. Jauss says it is a very regulated process. Costs are going up: a permit once cost $100 but now has risen to $500.

Jauss said the individual elk can be worth $10,000 or more. The velvet on their antlers and the membrane that forms the antler we see in the fall is harvested, processed, and is bought for treating arthritis and reproductive issues in humans and can be quite lucrative.

Jauss did not know how much longer he would run his farm. There is a lot of work to keep his fencing in good shape. His biggest concern is that some wild animal will infect his herd if his fencing fails.

"You don't need a moratorium or more regulation. If someone wants to start a game farm, just have them call me," he said.