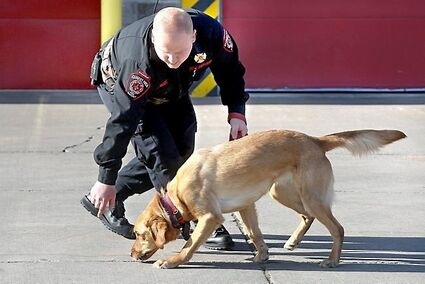 Cloquet Area Fire District fire investigator Jason Maki works with his K-9 partner, Wish, in a training exercise. Wish was trained to find accelerants at a fire scene, and her skills led to numerous arson arrests. Wish was euthanized Monday, after being diagnosed with advanced cancer.

A mix of golden retriever and Labrador, Wish had been with the fire district and her handler, Jason Maki, for nine years. She and Maki were certified on May 9, 2013, and she served enthusiastically - nosing out arson cases - until recently, when her health began to fail unexpectedly. She was diagnosed with advanced cancer and died Monday, exactly nine years from her certification date.

CAFD chief Jesse Buhs said Wish and Maki were a great team and spoke of t...