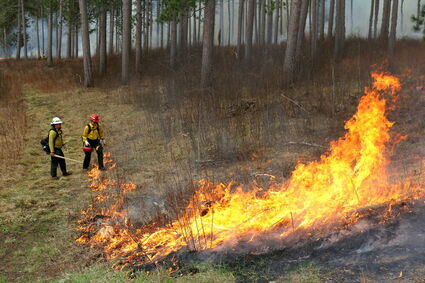 Plenty of excitement, and smoke, was in the air and forests along University Road in Cloquet last week.

On Wednesday, May 11, a contingent of 25 fire practitioners purposely burned 9.5 acres of the University of Minnesota’s Cloquet Forestry Center.

The primary objective of the prescribed burn was to reintroduce fire as an ecological and cultural process to promote and maintain the center’s historically fire-dependent forest.

“We brought fire back today, there hadn’t been fire here in … years,” said Timo Rova, who served as the “burn boss,” the official title for those who are qualified to plan, organize and execute prescribed burns.

“We were trying to show that fire on the landscape is good, that it has a role to play, and that we can do it successfully and safely,” Rova said.

Two parcels of forest were burned, officially called units B1 and B2, but dubbed the "Entrance" and "Cabin" units. The units were relatively small but are located close to the center’s buildings and grounds and along both sides of University Road, making them easily visible parcels. Forestry center staff also hope to burn the significantly larger units A and C, the Otter Creek and Camp 8 units, but will wait until after assessing the first prescribed burns completed last week.

The fires were classified as broadcast burns — also known as understory burns — which cover larger areas usually measured in acres. The last prescribed broadcast burn at the Cloquet Forestry Center was in 2002 on 20 acres in the Camp 8 section, and pile burns were held in the late 1990s. Fond du Lac Band member Vern Northrup, now retired, was the last burn boss to oversee the fires of that era. Northrup was invited and attended the burns last Wednesday.

Last week’s fire was the result of a collaborative effort by the Fond du Lac Band of Lake Superior Chippewa and the Bureau of Indian Affairs under a recently signed memorandum of understanding which relates to prescribed burning on tribal lands owned by the university. In addition to Fond du Lac fire personnel, fire practitioners from the Bois Forte Band of Chippewa, Leech Lake Band of Ojibwe, Mille Lacs Band of Ojibwe, Bureau of Indian Affairs, and The Nature Conservancy participated in the prescribed burns.

“It was an incredible team building exercise, we worked really well together,” Rova said after the prescribed burn was completed. “People's spirits are really high, we did a good job, fully succeeded, and everyone is really happy and we got some folks trained up.” Rova, currently residing in Ely, has been on “multiple thousands” (more than 3,500, he said) of wildland fires across the country over his 35-year career.

According to Kyle Gill, forestry center forest manager and research coordinator, staff there have been collaborating with Fond du Lac Band staff to match contemporary stewardship practices in line with understanding of the history of forest fire. The collaboration has been highly influential for relationship building, brought about the memorandum of understanding with the Bureau of Indian Affairs, and allows the Fond du Lac Band to tap into BIA-based capacity-building revenue sources.

“Forests need the fire,” Gill said. “I wanted to try to bring fire into our management portfolio. Through developed relationships, I learned about the history of fire and the human history of fire from an indigenous perspective. That shifted my perspective and we started to understand that a lot of the fires and what we see in the biological record, like tree rings and fire scars, are from human-led fires.”

The Nature Conservancy has been trying to build capacity for prescribed fire so that land managers can move away from the emergency response fires that have become common in recent years across the United States. The Nature Conservancy was a valuable partner, getting a burn plan written in conjunction with the Forest Stewards Guild for last week’s prescribed burn.

“Restoring surface fire to portions of the forested communities at the Cloquet Forestry Center is something we've been working toward for a number of years,” wrote Kyle Gill, Cloquet Forestry Center forest manager and research coordinator, in a notification prior to the prescribed burn. “The broad goals of restoring fire are ecological community stewardship and to stimulate opportunities for gathering, teaching, and research.”

Gill indicated it took about six years to research and understand the pertinent fire history and build the unique partnerships necessary to conduct the recent prescribed burns at the Cloquet Forestry Center.

“Bringing back the spark to this landscape through the partnership has been the most meaningful part,” said Paul Priestley, forestry inventory technician with the Fond du Lac fire and forest division, after the prescribed fires were completed. “Using the torches to do the actual lighting was pretty special, to have torches in the hands of Fond du Lac Band members and University employees working side by side. Running the ignitions was a very privileged and humbling part for me, being able to help direct how that fire was put on the landscape was pretty special.”

Clare Boerigter, communications manager for the St. Anthony Falls Laboratory, part of the College of Science and Engineering at the University of Minnesota, was present at the planned fire and provided a written statement afterward. 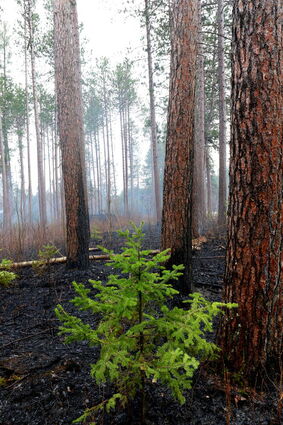 “Indigenous peoples have used fire to care for the land,” wrote Boerigter. “Over time, this use of fire has helped shape ecosystems in northern Minnesota; burning by the Anishinaabe helped create open forests with fire-dependent species like red pines and blueberries. The Anishinaabe identity, language and way of thinking are tied to these landscapes, which resulted from these culturally significant burning practices. In collaborating with local tribal nations to restore cultural fire to this place, the Cloquet Forestry Center is working to return fire to a forest that needs it while putting into practice an acknowledgement of the Anishinaabe fire stewardship which shaped this forest.”

Boerigter is the author of “The Camp 8 Stand: The Story of the Cloquet Forestry Center’s Old-Growth Red Pines” and often writes about the environment as well as her experiences as a wildland firefighter for the Forest Service. She is currently working on a book-length manuscript about wildfires.