Lumberjacks getting their rounds in 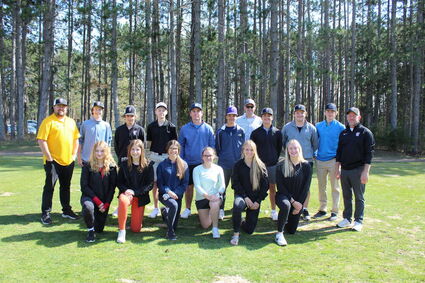 Members of the Cloquet boys and girls varsity golf teams take a moment before practice Tuesday for a team photo. Now that the snow has melted, the golf season has started in earnest and sections are coming up fast.

Unlike high school basketball and hockey - which have competitive seasons for four months - high school golf in northeastern Minnesota can have seasons lasting closer to one month.

"April was some tough weather, with both windy and wet conditions," said Cloquet golf boys head coach Aaron Young, noting that the Cloquet Country Club did not open this year until May 5. "Now, we're trying to play catchup with golf meets and practice."

"We're the defending Minnesota State boys golf champs ... which is fun to say, but really it's a whole new team that has to prove itself, since three of our top six varsity players graduated last year," Young said. "But, we're fortunate that we still had a talented nucleus coming back this year and those players moving up from a strong junior varsity team."

Last week, Cloquet defended its Lake Superior Conference crown against seven other teams, winning by six strokes over Hermantown in second and Superior in third. Cloquet's Karson Patten, a junior, finished second overall and teammate Anders Gunelson, a sophomore, finished fourth. The meet consisted of two rounds of golf: the first at Enger and the second at Cloquet. Both Patten and Gunelson boys made the all-conference team.

On Monday, May 16, Patten won the Duluth East Invitational at Northland Country Club. Again playing seven other teams, Cloquet finished the team competition second to Princeton, which is a Class 3A school.

Patten has been on the varsity since eighth grade so has represented Cloquet in two state tournaments - it would have been three had not Covid wiped out the whole 2020 season.

"It's always fun playing Northland. My goal there is to hit greens in regulation and try and two-putt, remembering that putts break toward Lake Superior," Patten said.

He said the goal is to get back to state, and "contend."

"It will be fun defending our section title at the Quarry, and hopefully again sending Cloquet to the state tourney," he added.

Gunelson is new this year on the Cloquet varsity. His second round was really solid in the Lake Superior Conference Championship: he scored 83 at Enger, and 76 at Cloquet the second day, thanks to good chipping and putting, he said.

"The weather was a little iffy too, so there were some higher scores," he said. "I got it done."

He said the vibe on the team is good. "Our team has good chemistry. We've all been friends for a while now, so it's all fun, practicing and competing against each other."

Other boys varsity veterans from last year's state championship team include senior Jacob Walsh and freshman Karson Young, who finished fifth in the state tournament last year after two very solid rounds, including a one-over-par 73 on day two. Other team members this year include Cooper Ellena, Lance Sayler and others; the six-player lineup changes because coach Young likes to give the junior varsity players the chance to play up, and varsity players a break sometimes.

Matt Carlson has been the Cloquet High School girls golf coach for several years. This season they've managed to have four players at varsity meets representing Cloquet, but lack the depth of Hermantown and Grand Rapids, which have six. 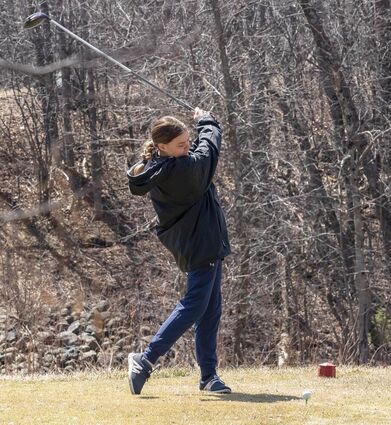 Juli Steinert takes a practice swing before taking a tee shot during the May 4 golf meet at Enger Park Golf Course.

CHS girls varsity players include Maddie Young, Avery Carlson, and Abby and Juli Steinert. Carlson said he has seen steady improvement in his players and thinks some could qualify as individuals for the sectional meet, particularly the Steinert twins: Juli and Abby. Juli placed fifth in last week's conference meet, making the first team for Lake Superior Conference while Abby and Avery Carlson made the LSC second team.

The season has gotten very busy suddenly. "With the weather we've probably had about an equal amount of meets and practices with a couple practices and a couple meets a week," Carlson said.

The short season makes it difficult to make many major changes to swings or putting strokes, but - unlike in previous years - coaches can now walk along with players during meets and offer on-course advice.

Carlson said the key to improvement is playing throughout the summer, after the school season is over. "It's hard to show up for four to six weeks and not show up again until next year and expect to get a lot better."

On Monday, May 23, Cloquet will host its invitational at CCC with 20 teams and 120 golfers expected.