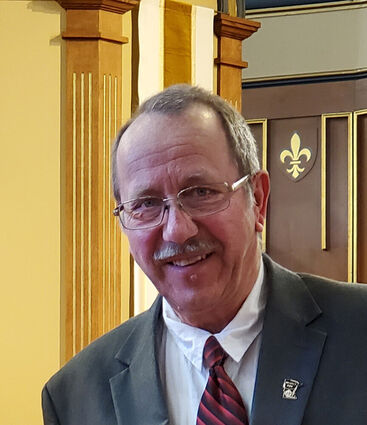 Byron Miles Hill of Cloquet, surrounded by family and friends, passed into the loving arms of Jesus on May 21, 2022, at Miller-Dwan after a brief, intense battle with cancer. He was born May 24, 1958, in Cloquet to Richard and Eleanor (Kopke) Hill. Byron graduated from Esko High School in 1976 and joined the U.S. Navy. He trained at Staples Technical Institute, worked as a

heavy equipment operator for more than 35 years, and ran a snow removal and excavation business. Most recently, he worked for Jim Perrault Construction. Byron was actively involved in AA for more than 40 years. He was a Fourth Degree member of the Knights of Columbus and a longtime active member of Queen of Peace Catholic Parish. He enjoyed spending time at the French Club, and camping and fishing with his family. Byron was united in marriage to Mary Jo Vorderbruggen on June 7, 1997. His family and faith shaped his view on life, and he loved being a dad.

Byron was preceded in death by his parents, his sister Cheryl, and two infant daughters. He is survived by his wife of 25 years, Mary Jo; children Miles, Mathias, Julia, Isaac and Thomas; and cousins, in-laws, nieces, and nephews.

Visitation: 5-7 p.m. with a Rosary service at 6:30 p.m. Friday, May 27 at Nelson Funeral Care in Cloquet. Visitation continues at 10 a.m. until the 11 a.m. Mass of Christian Burial Saturday, May 28 at Queen of Peace Catholic Church in Cloquet. Interment service will be at New Calvary Cemetery with military honors presented by the Cloquet Combined Honor Guard. A luncheon will follow in the church social hall. Arrangements are with Nelson Funeral Care.