The mystery is solved! The Cloquet Lumberjacks second place state basketball trophy is at the Carlton County Historical Society.

In the "clichés are clichés because they are true" department, I offer one here: Newspapers record the first draft of history. For me, there is nothing like going back into newspaper archives and reading first accounts of events, historic and not so historic. It's a passion of mine in downtime, rabbit holes to get lost in.

And so it was recently when I went about following up on a reader query about where in the world was the trophy for the 1963 Cloquet basketball team that finished second in the storied one-class state tournament that year. As our all-things-local-sports-history-and-more wunderkind Steve Korby wrote in April, the Lumberjacks' appearance in that tournament was a thrilling time for those who lived it. And pundits across the state still say the title game against Marshall was one of the greatest basketball games ever played in the tournament.

Steve wrote that at one time, the runner-up trophy was on display at the Carlton County Historical Society. I kept that in mind as I proceeded to sleuth out the location of the trophy.

I started at home, with my archival newspapers.com account. It was a treat to read about the Cloquet run that year. There were features in the Minneapolis papers on the players and coach, Ben Trochlil. But not much about the trophy. I was most interested in perhaps seeing a picture of the grail I was after.

I searched the trophy cases at the high school and middle school. Most of the hardware there is from only the last 50 years or so. I ran into current head basketball coach Steve Battaglia and others in the activities office. They had never seen the trophy before and were anxious to see it if I did come across it.

Finally, at the end of last week, I made a visit to the historical society. Director Carol Klitzke said, sure, we have some trophies. Most of them were for county fair and other non-school events. Then she got on a computer to fetch the inventory list. Sure enough, a basketball trophy was donated to the museum in 2013. The 1963 trophy. The clouds parted outside and a glow likely came to my face.

We trudged to the basement and after a few fruitless searches where the list said the trophy was stored, I came across it on a bottom shelf. I almost didn't want to touch it. I had been living this search for a good seven days and now here it was, the end goal.

It includes a net, likely cut down from one end of the Williams Arena court where the team lost that storied championship game. Or maybe it's from the section championship.

Carol said she'd like to display the trophy upstairs again. I said it was only right, since that 1963 team was the toast of the town and, as the first team to make a state basketball tournament appearance, will always be a part of Cloquet lore.

But how did the trophy get there? Why hadn't the school kept it on display?

Ben Trochlil, the Lumberjacks coach, said, yes, he donated the trophy in 2013, 50 years after the historic game. He doesn't recall how he acquired it.

He did say someone at some time suggested he take it, and that's where team historian Howard Lavick picks up the mystery.

"Ah, the meandering Cloquet basketball trophy," he began when asked about its travels. "For many years, the trophy had been kept at the old high school building, displayed in a showcase near the old gym. As far as I recall, it was still there until I believe it came into the possession of coach Trochlil. How and when, I am not sure. I think the high school was being remodeled and they did not know what to do with the trophy, so they gave it to the coach."

I have heard a similar recounting before, that the school once culled its old trophies. It makes sense, considering that the trophies it has on display reach back only so far. Many of the ski trophies from before 1970 can be found at Pine Valley. Who knows where other trophies went off to. I think there must have been a lot of marching band hardware considering Cloquet's reputation for decades starting in the 1940s. And, in a case I am still on, there are debate trophies to be found.

The existence of the 1963 trophy hasn't been as much of a mystery for the players and other former students who've gotten together over the years to reminisce about those heady days.

"I saw it proudly displayed in the main area (of the historical society building) as recently as 2016 or 2017," Lavick told me. He sent me a picture of players with the trophy in 2009 as well.

You'd think now that we know where the trophy is, the school might want to fetch it back. Klitzke said that likely won't happen. She said the society is the best place for it, where it will be taken care of like all of its precious artifacts and available for those who want to see it. I agree that the museum is the best place for it.

Remember the rabbit hole of searching newspaper archives? Searching "Cloquet" and "trophy" led me to another mystery I hope readers can help me with. It is the saga of the Minneapolis Journal Cup, the prize for the top debate team in the state starting in 1902. Cloquet won the cup, presumably, four times. The first was in 1918. The cup was the traveling variety and was returned each year when a new state champion was crowned. But Cloquet never returned its cup, as it was lost in the fires of that year. The newspaper had to make a new trophy. 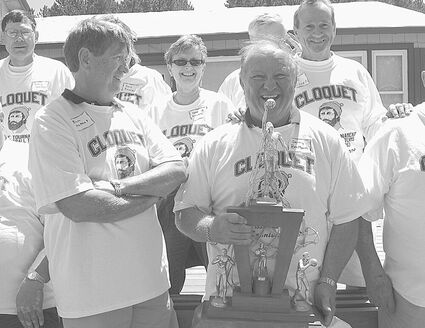 My quest, which has included queries to several schools in the state, is to find that cup. The Minneapolis Journal merged with the Star in 1939, and that's where the trail of the traveling cup goes cold. The last team to win the cup, as archived in old stories, was Minneapolis West, which no longer exists.

Cloquet won it in 1938, and I need to go back into microfilm of the old Pine Knot archives to read about that and two subsequent championships in 1949 and 1957.

Help a poor historian out who is stuck on the fate of trophies long forgotten but, I believe, historically relevant. If you have debate team info, let me know.

Mike Creger is a reporter and page designer for the Pine Knot News. Reach him at [email protected] News.com or 218-216-6292.