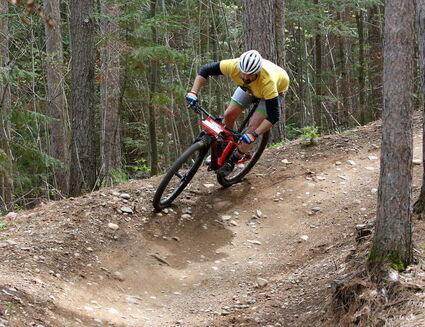 Matt Hagelin, coach of the CEC mountain bike team, participated with his wife, Ashley, in the two-rider, 12-hour race division of the Log Jam. They finished in second place and completed laps for 95 miles.

Mountain bikers took to the trails at Cloquet's Pine Valley last Saturday for a full day of riding in a new race event called the Log Jam.

For some race participants, a full day was defined as 12 hours on the race course. Aiden Jurek of Minneapolis was the overall solo winner of the 12-hour race, riding 85 miles on the hilly

course and setting the individual mark to beat in future Log Jam races. The winning team in the 12-hour race completed 29 laps for 145 total miles.

Riders had the option of signing up for a 12-hour race or six-hour race, and competing solo, on a two-rider team, or on larger teams with up to six members.

In the two-rider and team events, only one rider from a team was on the course at a time. Solo riders, duos, and teams who completed the most laps at the end of the six- or 12-hour time frames were declared winners of their respective races.

The course was a 5-mile loop that followed a mix between the singletrack trail and Nordic ski trail throughout Pine Valley. The fastest individual loop times were just under 23 minutes.

"The race had a super fun, community-based atmosphere," said Brendon Menze, Log Jam race director and Cloquet Singletrackers president. "We had racers who were racing hard and we had groups of friends who were out just having fun."

A pit area where riders passed their timing devices to the next - similar to a relay baton handoff - was a popular spot for spectators. Located near the pit area were team tents, music, food trucks, the official lap counter and timer, and a place to warm up.

The inaugural Log Jam event attracted 94 registered participants from the Twin Cities area, Mankato, Wisconsin and Colorado, as well as many local riders. Designed for all skill levels, the youngest rider was 12 and oldest was 59.

The six-hour and 12-hour events started at the same time in a mass start at 7 a.m., when the temperature was a chilly 36 degrees.

"Today was a good day," said Matt Hagelin, coach of the local high school mountain bike team and a participant with his wife, Ashley, in the two-rider, 12-hour race. "A lot of people were out supporting the city of Cloquet and the trails at Pine Valley. It's one of those events where we can come together and have a good time as a group."

"This area was missing a long, like 12-hour, race," Menze said. "There's a lot of regular mountain bike races but nothing with these durations and with the team atmosphere, the team relay style, in the Northland. We wanted to create something different, something unique."

Money raised through registration fees and sponsor donations will be used to put on a Kids Pedal the Pines Day at Pine Valley in July and also help with trail maintenance and grooming. The Cloquet Singletrackers hosted the Log Jam with support from the CEC mountain bike team, the city and a large group of volunteers. 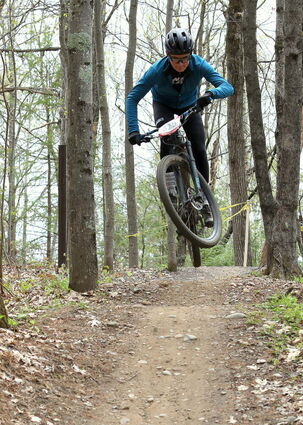 Aiden Jurek of Minneapolis was the overall solo winner of the 12-hour race, riding 85 miles on the hilly course at Pine Valley during the inaugural Log Jam mountain bike race.