In Wrenshall, small graduating class allows for a lot of huzzahs 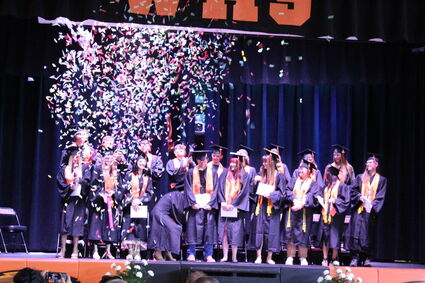 Wrenshall graduates deployed the customary exploding confetti to mark the end of their commencement exercises.

Wrenshall students and supporters may have enjoyed the most unique graduation ceremony Friday afternoon, thanks to English teacher Joel Swanson. The guest speaker rapped - rather than recited - his original "Grad Poem 22" before the crowd in the Wrenshall gymnasium.

In the poem, Swanson spoke of the fork in the road: "one path taken by those seeking less resistance and the more difficult one that questions our existence."

But Swanson wasn't done. When he was done, the teacher called for a volunteer among the 19 graduating seniors to take a stab at interpreting the poem.

Josh Anderson raised his hand, stepped up and got to the heart of the poem. He ended with a verbal "mic drop" and a high five with Swanson.

Swanson reiterated what Anderson had opined, that it's important to have perspective in life.

"Perspective is knowing what truly matters and not sweating the small stuff, which is easier said than done," Swanson said.

Without perspective, he said, the small stuff becomes really big stuff and leads to fear and anxiety. With perspective, it's easier to find peace, calm, happiness and direction.

"At some point, everyone must find something that puts our lives, puts us into perspective ... gives meaning to what we do. It may be different for everyone," he said, admitting that it is also possible to lose perspective that one has gained before.

"In many ways, this group has helped me regain perspective," he said. "Sixth-hour English 12 reassured me what I do for a living really matters."

Swanson wasn't the only one to speak in the Wrenshall gymnasium Friday. Salutatorian Magdalene Sowada spoke, and so did valedictorian Sage Fernquist and class representative Joel Lembke.

Fernquist spoke of the "elephant in the room" - Covid 19 - and resilience. "Coming back, rising up from the rubble left behind by Covid's wave, this class has been able to bounce back and create an incredible live atmosphere," he said. "Shrugging off the troubles and melancholy with a pure and restrained vitality." In short, he said, even if he woke up on the wrong side of the bed or in a bad way, connecting with his classmates helped lift him up.

Guidance counselor Erik Holter handed out the special awards for high grade point averages and membership in the National Honor Society. Superintendent Kim Belcastro certified that everyone on stage had met graduation requirements and principal Michelle Blanchard presented the class.

Swanson spoke for more than 30 minutes, at one point suggesting that they have an intermission, revealing that his speech was 10 pages long. 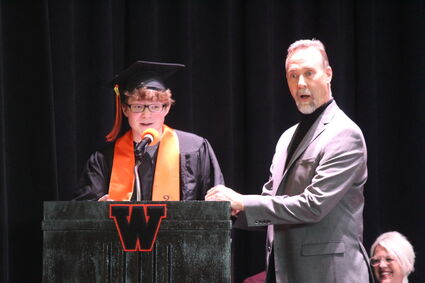 It's a small school, a more personalized experience, Swanson said, before Part 2 of his speech, in which he spoke of each graduating senior, sharing comments from other school staff and his own observations. "If you wanted to go to a graduation where they just read 250 names, you should have gone to Cloquet or Duluth," he said.

The stories ran the gamut, from finding out Corey was watching YouTube videos in the bathroom in eighth grade to Pidge dramatizing Kim Possible as a one-person show and a prediction that Sage would make a huge difference because he is so kind and intelligent, along with 16 other mini-moments.

When the speeches were all finished and all the ceremonial moments concluded, Swanson also handed out the diplomas and lots of hugs.

Then the Wrenshall concert band - performing this spring for the first time since 2019 - played "Song of Joy" as the graduates left the stage and celebrated their achievement with friends and family and each other, for a little while longer.