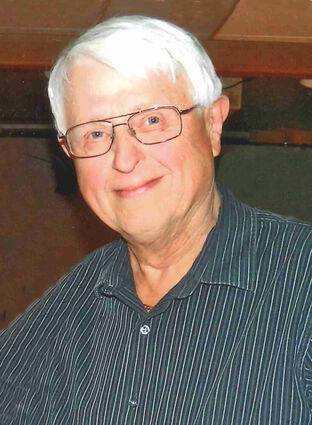 David Meister, 83, of Cloquet passed away Thursday, May 26, 2022, while surrounded by his loving family, including his dear friends Al and Diane Hart, with his loving wife Pat holding hands with him until the very end.

David was born Feb. 8, 1939, in Detroit to Joseph and Lillian (Peterson) Meister. The family moved frequently in his youth. While in Gary, South Dakota, David, under the teaching of his father, Joe, developed and honed the skills that served him throughout his life. He learned all of the necessities that farming in the 1940s involved, and he, along with his cousin, Curtis, honed these skills on Uncle Emil’s farm. David excelled at the development of these talents — if he couldn’t fix something, it couldn’t be fixed.

Hunting and fishing were also part of life on the farm. These “hobbies” became a love he passed to his two sons, especially his younger son Mike.

He moved back to Michigan and graduated in 1958 from Ferndale High School. He enlisted in the Navy and proudly served as an aviation mate from 1958 to 1961.

David married Patricia Fry on Sept. 12, 1964, in St. Paul. His work with the Bell Telephone Systems brought him to Cloquet in 1973. This was supposed to be a one-year assignment but David and Pat have been in Cloquet since.

David worked with Bell (through its many name changes) until he retired after 30 years of service in 1995. He served in the Cloquet Rotary, Kiwanis Golden K Club, and was active in the Junior Achievement organization. David was a member of Our Savior’s Lutheran Church in Cloquet and served as head usher for many years.

He enjoyed taking the family each year to the Battle Lake area for vacations. In 1988 David and Pat acquired a cabin, where memories were made by all who visited on Prairie Lake.

David was an incredibly gifted craftsman. He built two full decks and an entire bathroom with only the plans he had in his head.

David was preceded in death by his parents. He is survived by his wife of 58 years, Pat; sons Steve (Karen) Meister of Marshall, Minnesota and Mike (Tracey) Meister of Proctor; sister Nancy (Art) Doty of Lansing, Michigan; grandchildren Noah (Angela), Sydney, Alex, and Jayden Meister; great-granddaughter Zoe and her future sister on the way; special cousin, Curtis Meister of St. Paul; and special sister- and brother-in-law, Dolly and Byron Selbrede.

In lieu of flowers, memorials are preferred to Us Too prostate cancer support group or Our Savior’s Lutheran Church.

Services will be held Monday, June 6, at Our Savior’s Lutheran Church in Cloquet with a visitation at 10 a.m. until the funeral service at noon. A luncheon will be held immediately following in the church social hall. Interment will be held at Fort Snelling National Cemetery. See the online guest book at http://www.nelsonfuneralcare.net