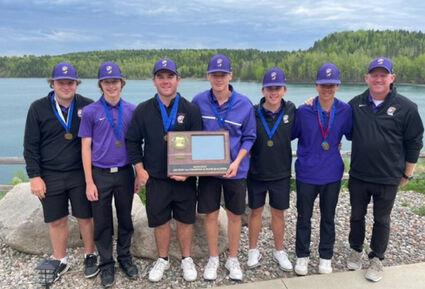 The Cloquet High School boys golf team, the defending Minnesota State Champions, are heading to the state tournament once again.

On June 1 and 2, with windy and chilly conditions, the boys won the Section 7A crown unequivocally at the Quarry golf course at Giants Ridge in Biwabik. The top three individuals in the two-round meet were all Cloquet players.

With difficult playing conditions, Cloquet was led by junior Karson Patten with a score of 153 (76-77), sophomore Anders Gunelson 157 (77-80), and senior Jacob Walsh 163 (83-80). The top four players of each team determine team scoring. Freshman Lance Sayler finished sixth overall in the Section meet with impressive scores of 166 (87-79) to make Cloquet’s team total of 635. Mora was second with an overall score of 687 and Rock Ridge third at 689. Cloquet won the section title by 52 awesome strokes.

The Class AA state tourney is, once again, being conducted at the Ridges at Sand Creek Golf Club on June 14 and 15.

Other Cloquet scores from the six player section team were Cooper Ellena (So.) and Karson Young (Fr.) both at 176. All six players qualify for the State Tournament. Last year, Karson Young -- then an eighth-grader -- had a fabulous tournament, finishing fifth in the State.

“On day one it was windy and there was a lot of pollen in the air," said a proud coach Young. “It actually made following the flight of the ball difficult. Even so, we started out fast with six of our players in the top 10 on the front nine.

"On day two, it was windier yet, making the challenging weaving, canyon course even more difficult, but we even increased our team lead.” The Quarry is an actual former Iron Range sand quarry.

Cloquet has made several state tourney appearances with Covid-19 interrupting their streak, but still, most of the players have played the course and are familiar with the Ridges at Sand Creek layout. Interestingly, both the Sands and the back nine at Cloquet Country Club were designed by legendary golf course architect Joel Goldstrand.

With most practice rounds and home tournaments at CCC, maybe this gives the Jacks an overlooked advantage. We hope so, good luck at Stste, , Lumberjacks.