Esko grads get through with some grit 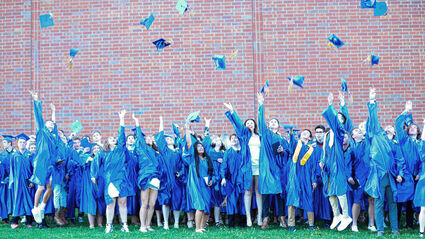 A blue wave of seniors graduated from Esko High School Friday. And they made a little history.

Of exactly 100 seniors -100 percent of the Esko Class of 2022 - graduating Friday, 10 were awarded the title of valedictorian - that means 10 percent of the class earned the highest academic ranking.

That was just the icing on the cake of their many accomplishments, said principal Greg Hexum. But he acknowledged that life hasn't been easy for the graduating seniors, whose high school careers were greatly impacted by the first pandemic in more than 100 years, and the loss of a classmate and athlete who died on the football field in October 2019, the result of a congenital heart defect.

Jackson Pfister wasn't named Friday, but he was a part of the ceremony, in words and undoubtedly memories.

"To all 100 of you who lost a friend, classmate and teammate, nothing is more powerful than your faith, hope and resilience in the face of incomprehensible tragedy," Hexum told the seniors. "You do honor to those you've lost."

Zuck asked the audience to take a breath, and listen to their hearts. She talked about the college essay she eventually abandoned, which started with a description of the heart. "Little did I know, I was missing the most important interpretation of the heart: it cannot function alone. It needs a surrounding body," she said. "This critical aspect of the heart defines the Class of 2022 incredibly well."

Cornell started his speech with humor. "These hats are not one-size-fits-all," he said, copious amounts of hair emerging from under his mortarboard. He then went on to talk about what he feels is one of the most important lessons from his school years: how to think.

"There is freedom in our own thought, but danger as well, when we selfishly ignore the outside world and we make everything about us," he said, adding later: "I'm not here to tell you what you should or shouldn't be thinking about, but rather to remind us that we have the capacity to choose what we spend time and energy on."

Addressing the audience and students in the packed gymnasium, principal Hexum touched on the isolation and ever-changing rules of the pandemic. Many adults looked to the past for guidance, he said.

"I value the past ... but often the best lessons about how to live come not from the past, but from the young people who are our future," Hexum said, before sharing his take on Life Lessons Brought to You by the Class of 2022.

1. Go all in. Hexum spoke of three students. "You remind us that what's really cool is pursuing your own path and going all in," he said of the entrepreneurial grad. Of the loudest grad and team supporter, Hexum said, "Lady, you rock energy that inspires people to invest, go hard, be their best and never hold back."

"You remind us that life is good when you go all in and do whatever you choose to do," he said, before moving on to the next lesson.

2. Make your days great. Hexum addressed the senior who offered the county a redistricting plan, the lunch ladies, and more. "The 12 of you show us it's our attitudes and our outlooks on life that chart our courses."

A recent guest speaker told Hexum he'd "never seen a group more alive and more invested in the moment than you. He also said that group must be a real handful," he added, to chuckles from the audience.

3. "There's something fundamentally life-giving and good about persevering, and doing more than you ever thought possible," Hexum said, thanking students who fought homelessness, mental health and other challenges, for setting an example for all. "You inspire me," he said.

The principal wrapped up his speech with some highlights of the Class of 2022.

Here are a few things he shared about the class.

• They led the region in average ACT score by an even larger margin than usual, "pandemic be damned."

• They topped the Arrowhead region's 36 school districts in nearly all academic measures, each year from third grade through the 11th in math, reading and science on the Minnesota Comprehensive Assessments.

• Members of this class won a wave of conference, regional, academic and athletic titles throughout their high school careers, in sports as well as robotics, band choir, trapshooting, bass fishing, and more. 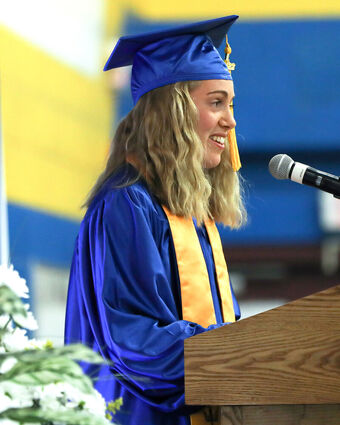 • They earned almost 2000 semester credits in the College in the Schools program, saving their parents almost $750,000 in college tuition payments.

• In all, almost $2 million in scholarships was awarded to Esko seniors.

"What they've achieved individually and as a group is exceptional," he said.

Hexum said 95 percent of the class is enrolled in college or vocational school/skilled trades, or enlisted in the military. "Most of the others are entrepreneurs," he said, before presenting the Class of 2022 to the Esko school board, who then presented them with their diplomas, making them graduates at last.