Race is on for new Sawdust 5K organizers 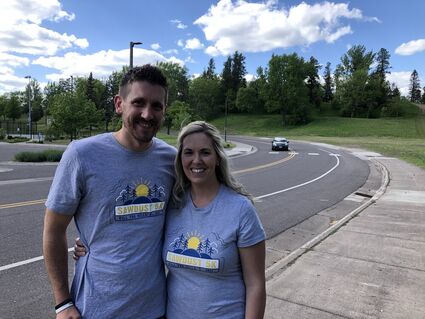 Julie and Sam Jacobson are new to organizing the Sawdust 5K race but not new to the race itself. The July Fourth race starts and ends at Pinehurst Park in Cloquet, and wanders up and down the hills in the surrounding neighborhood.

When Sam and Julie Jacobson decided to run the Sawdust 5K with their boys on July Fourth last year, they had no idea they'd literally be running the race this year as its new organizers.

But they love the annual Cloquet race, so when Sawdust founders Jeff and Alyson Leno said they needed to step down to spend more time with their kids, the Jacobsons stepped up.

The couple complement each other as race organizers, as Julie has experience with fundraising and event organizing from past jobs with Community Ed in Wrenshall and with the Community Memorial Hospital Foundation. Sam, on the other hand, is an endurance runner, and has participated in many races, far and near.

Jeff Leno said they originally started the race because they saw a need.

"As runners, we've experienced so many fantastic small-town races which tend to bring together a whole host of family, friends and community members to enjoy an event for a wide range of ages and abilities," Jeff Leno said. "We feel like we more than achieved that ... the past 10, 11 years have been extremely gratifying, watching the race become a staple in Cloquet."

Both he and Alyson were thrilled when the Jacobsons approached them, he said. "We truly couldn't think of two better people to carry on the Sawdust than Julie and Sam," he said. "We are confident they are going to do a fantastic job with the Sawdust races and we're excited to watch it grow, evolve and continue to be one of Cloquet's most exciting events."

The Pine Knot News sat down with Julie and Sam last week to find out more about their take on the 11-year-old race.

What made you decide to take over the Sawdust, and its companion race, the 1-miler through downtown Cloquet?

Sam: I know Jeff and Alyson, I run in their running club and I've run the race multiple times, so I was pretty familiar with it. And I think we've both just always wanted to be doing more in the community. It seemed like a good opportunity.

Julie: Also to raise money for nonprofits. We decided this year's money will go to Sunnyside Health Care Center.

Why do people like to start their July Fourth holiday by running a 5K (or double, in the case of the Jimmer 10K)?

Sam: It's a nice way to start the day: you get out, you are active, you're part of a big group. It's a pretty happy, positive environment. And it leads right into the celebrations for the rest of the day. It's fun too, because a lot of neighborhood people come out, people set up sprinklers along the racecourse and cheer.

Julie: Race day actually makes me emotional. I love the music playing and everyone getting excited. We ran last year with the boys because we wanted to make more family traditions.

What is special about the 1-miler?

Julie: They start the race next to Northwoods Credit Union on Avenue B, but it's really a race down the parade route, on Cloquet Avenue. It's a very different race.

Sam: Everybody's there and ready for the parade, so it's quite a few spectators. You don't get that, unless you're running Grandma's Marathon or something like that.

How are entries going?

Sam: There's a lot of Sawdust regulars. I'd say it's on track compared to the last few years, but it does seem like a lot of people sign up at the last minute or on the day.

Julie: Please sign up so we can get you a T-shirt. It helps us plan better and then we can make sure we have enough of everything for everybody.

Will there be any changes? 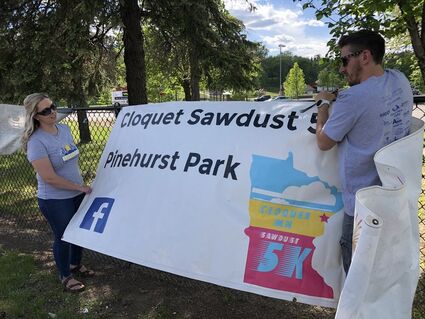 Julie: We are charging $7 for the 1-mile race, which is usually free, with the money to go to the Fourth of July committee to help pay for all the other events. Also people won't be able to swim after the race this year, because we weren't sure the swimming pool would be staffed.

Sam: We didn't want to go too crazy changing stuff the first year, but I think we do have some ideas for the future.

Julie: Here's a fun story: I got a message from somebody that is doing this challenge where they're running a race in every state. So somebody out of state said, hey, we need a Minnesota race. Since it's officially timed, they signed up. I'm hoping to make a big deal about that on the day.