Early primary voting off to a slow start 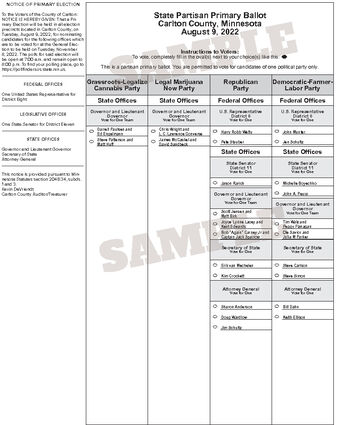 Early voting started June 24 for the Aug. 9 primary election, but so far it’s been a trickle versus the flood of absentee ballots cast before the 2020 elections, when there was a presidential election and lines across the country the first day voters could cast their ballots in advance.

In an attempt to avoid confusion, county auditor/treasurer Kevin DeVriendt noted that “early” and “absentee” voting are the same thing. Whatever name you choose to call it, DeVriendt said last week it’s been slow going. “We may have seen 20-30 people come in so far, but that’s it,” he said.

Of course, there is only one local office that requires a primary election, and that’s the Democratic-Farmer-Labor Party race for State Senator District 11. That race has two candidates — Michelle Boyechko and John Peura — vying to face Republican incumbent Jason Rarick in the General Election. (Read about Peura and Boyechko in next week’s issue.)

As displayed in the sample ballot on page 18, there are plenty of other candidates in the primary election. Some are familiar, others not so familiar.

Incumbent U.S. Representative Pete Stauber has a challenger in Harry Welty on the Republican side, while John Munter and Jen Schultz are both hoping to get to the General Election for the DFL in the same race. Numerous candidates have filed for the office of governor/lieutenant governor, with two teams each in the Grassroots-Legalize Cannabis Party and the Legal Marijuana Now Party. Three teams are vying for the top spot on the Republican ballot, and for the DFL, incumbent Tim Walz and Peggy Flanagan will face Ole Savior and Julia Parker.

Voting early is simple in Minnesota. Residents of voting age can pick up a ballot at the auditor’s office on the second floor of the Carlton County Courthouse and take it home, and return it either in person or by mail, or they can fill it out and turn it in on the spot.

Those who prefer not to register online can call the county auditor’s office at 218-384-9127 or stop by the courthouse during regular business hours.

In other election notes, the filing period for local races that don’t hold

primaries (e.g. school boards, townships and many of the smaller cities) runs Aug. 2-16.