Recently I received in my mailbox a stamped envelope with no post office markings and no signature or return address, and inside a letter written to me. Obviously, the unknown [writer] knows my political opines or has read them in several printings. Because I can’t respond to the unknown letter writer, I am writing an open letter in the newspaper, which I have the courage to sign.

In the letter the [writer] listed inflation, gas prices, groceries, poor schools, sexualizing little school children, killing babies in the womb on demand, open borders, fentanyl, gangs, drug cartels, carjackings … almost to say if we again elect a Republican, this will all magically go away overnight. 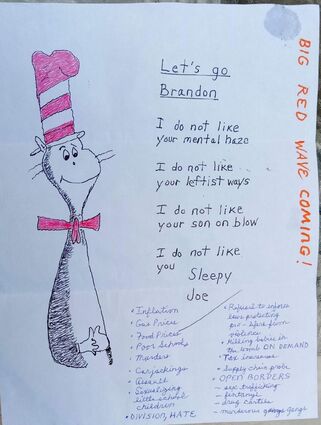 The [writer] blames many of the above-mentioned items on President Biden, overlooking Russia’s hacking into the Texas oil refineries or the war in Ukraine. Many of the problems the [writer] speaks of are happening worldwide, not only in the U.S.

The [writer] claims a Big Red Wave is coming, as claimed in the last election cycle. In some states it did — however, we no longer have President Trump.

As an open-minded person not married to a political party, I use my privilege to vote for what is best for our country.

As we’ve all seen lately with the results of the Jan. 6 investigations, our last president is the cause of the current division and hate that the [writer] blames on Biden.

Editor's note: A picture of the anonymous letter is attached.