'She was the glue that held us together' 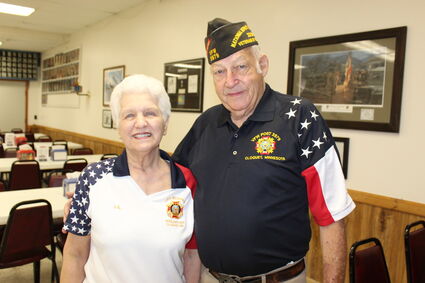 Local veterans organizations lost one of their most valued and beloved volunteers last week.

Folks at the Cloquet VFW, DAV and American Legion aren't sure what they will do without her.

"She was the glue that held us together," said gambling manager Troy Smith, sitting in the party room at the VFW Club in West End Cloquet, which houses all three veterans groups along with the Cloquet Eagles club.

Veteran Ron Stiger said it well. "You know who they say behind every strong man, there's a stronger woman? That's Lil. Only in this case, the man is the VFW."

She was part of "everything," Stigers said, describing what she did as "herding cats" in connecting all sorts of collateral efforts with her own.

The two veterans were not exaggerating. Officially, Lil had been the assistant gambling manager since 2010, but she was involved in most of the activities at the Hebert-Kennedy VFW Post 3979 and had been a big part of the veterans organizations since marrying Jack LaVoy in 1990 and moving to Cloquet.

After Jack died, Lil met Carl Schenk about six years ago. They became a couple who worked and played together. They ran the extremely popular senior dances and bingo, raised money for various causes, served on numerous committees, and spent time visiting and raising money for veterans at the Silver Bay Minnesota Veterans Home, and much more. She was also a patriot, and enjoyed being part of whatever the veterans were doing on Memorial Day, July Fourth and Veterans Day.

When she saw a need, she didn't hesitate to step up "with her whole heart," said Rich Chasse, former VFW commander and gambling manager. She also helped Chasse with the Marine Corps Ball - as long as she got dessert first - and coordinated the school patrol pizza party for years. She also spearheaded the VFW poppy drive for as long as folks there can remember.

"She was loved by all," Smith said. "She would introduce me to people and she'd be telling me about their kids. She had that ability to know people at that personal level and touch hearts."

Lil was also very involved in the VFW Auxiliary, serving as local, district and even state VFW Auxiliary president in the past, and more recently as treasurer for the local and district groups.

Schenk said LaVoy made up a new word: voluntold.

"We were 'voluntold' and we could not resist doing it for her," he said. Schenk got voluntold to do more things than most people. He was happy to do it.

"Lil took me from being nobody to being somebody," he said. "She changed my life around 180 degrees. She taught me how to care for people, how to do things for people and work with her. We were a team. And when she needed someone to go with her to different state and national conventions, I was very proud to be with her."

Gambling coworker Anja Teorey said the two were interchangeable. "If you found one, you found the other," she said.

Schenk shared how they met online and then in a Duluth restaurant six years ago. "She had those pretty blue eyes and a smile that would sink any man," he said.

Lil was humble too. She and Schenk were grand marshals in the 2019 Cloquet July Fourth parade. When informed of the honor, LaVoy's initial response was "Why? What did we do?"

The real question is, "What didn't they do?"

The dances, now held almost weekly, were not a military event. They were open to all and have become very popular. The attendees - almost all senior citizens - have also become a "very close-knit" family, Schenk said. Lil's personality helped make those occasions special too.

She also acted as chief photographer for many events, Teorey said. "She loved her photography; I especially saw that at the Christmas Party. She got everybody: if it wasn't the staff, it was the kids."

Smith said her photos are important, especially as the organization ages. "You've got names on the wall, but pictures of the events and the moments - Lil helped all of us capture that."

"And she'd make a lot of extra copies," said DAV and VFW senior vice commander Gary Dahl with a chuckle.

Schenk and the others who make up the leadership team at the veterans organizations are still grappling with her death.

"This is a rare occurrence when you have an irreplaceable person," Smith said. "Not one person will be able to replace everything she touched. It will have to be a collaborative effort. Part of it was her institutional knowledge, part from her infectious personality and part from her high motor. She was stubborn; she would go all day. Sometimes, toward the end, we'd have to make her go home and rest, because she wanted to stay just a little bit longer."

Although Lil LaVoy was not a veteran, the Cloquet Area Honor Guard planned to be at her service Thursday, July 21, to salute her.

"She's done so much for us, we will be there for her," said Chasse, also a captain in the Honor Guard.

In lieu of flowers, the family is asking for donations to the Silver Bay Minnesota Veterans Home.

And so her service continues.