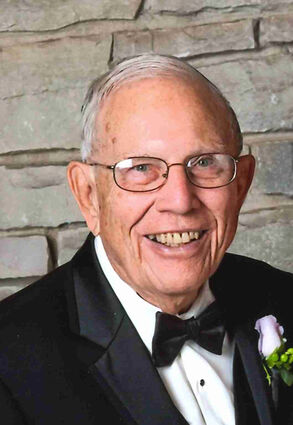 Donald Eugene Grant was born July 26, 1929, in Winfred, South Dakota to William and Margaret Grant. He attended high school in Madison, South Dakota and furthered his education at General Beadle College (now Dakota State), Colorado State University in Greeley, where he earned his master's degree, and the Ohio State University, where pursued his Ph.D. Don taught math at Big Stone, Yankton, and Cloquet High School, retiring in 1987 after a nearly 30-year career. He was united in marriage to Mary Margaret Barg on Oct. 22, 1960, in White, South Dakota. Don also served his country in the United States Air Force during the Korean Conflict. He was based in Germany. Don passed away on Sunday, July 31, 2022, at St. Luke's Hospital in Duluth, Minnesota.

Don was a member of Queen of Peace Catholic Church in Cloquet. He was active in the Knights of Columbus as a Third- and Fourth Degree Knight and served at the state level. He loved camping, especially with the Knights of Columbus International Camporee. In his spare time he liked golfing, playing cards and playing marbles. Don also enjoyed traveling and spent more than 25 winters in Arizona.

Don is survived by his wife, Midge; children, Cathy, Michael (Marilee), Mary Beth and Erin (David) Carlson; and grandsons, Aaron, John, Noah and David Grant, and Grant and William Carlson. He was preceded in death by his parents.

Visitation: 5-7 p.m. Thursday, Aug. 4 at Nelson Funeral Care in Cloquet. Visitation continues at 10 a.m. until the 11 a.m. Mass of Christian Burial Friday, Aug. 5, all at Queen of Peace Catholic Church in Cloquet. Interment will be at New Calvary Cemetery in Cloquet with military honors presented by the Cloquet Honor Guard. A luncheon will follow at the church social hall. Online condolences may be left at http://www.nelsonfuneralcare.net. In lieu of flowers, memorials may be sent to the Cloquet Educational Foundation.