Aliyanna Webster, 10, of Rochester, wins a race for possession of the ball Thursday, Aug. 11, outside the Fond du Lac Ojibwe School. Webster and the others were participating in the weeklong Lax-4-Life camp conducted by the Band. The camp brought together players from Fond du Lac and Red Lake bands of Chippewa, Leech Lake Band of Ojibwe, Oneida and Ho-Chunk nations, and Little Earth of United Tribes.

"We have a lot of Native talent in this game," said Bosto, organizer of the Lax-4-Life summer lacrosse camp.

Lacrosse nets lined a field divided into playing areas for both younger and older boys and one for girls.

Bosto noted 32 children from six regional tribes taking part in the weeklong camp – a celebration of lacrosse and the Native American cultures from which the game sprang centuries ago.

The players were under the instruction of a host of accomplished, mostly Native American, coaches imparting skills such as shot-making, stick-handling and passing.

Campers lodged inside barracks at the Cloquet Forestry Center throughout last week. They ate together, practiced and swam together, and learned about diabetes prevention and game strategy. They played afternoon lacrosse games, and held a banquet to culminate their week.

"Traditional is better," said 11-year-old Jess Headbird, of Cass Lake, while jogging between drills, happy to be playing the cultural game.

Lax-4-Life started 12 years ago and ran through 2015. The event had to be canceled after a lightning strike killed power to the forestry center in 2016. The pandemic wiped out more recent possibilities.

"You lose momentum," Bosto said. "It feels wonderful having these kids back together."

The game is played using netted sticks to hurl and catch a ball. The aim is to score goals protected by a goaltender.

It helps to be fast. But proficiency in possessing the ball and keeping it in the air while passing among teammates leads to the sport's prettiest moments.

For Veronica Nash, a seven-year member of Twin Cities Native Lacrosse, participation as a coach was about giving back to the game and standing up as a mentor for younger players.

"A lot of us didn't grow up with that," Nash said. "It's awesome to see other Native coaches and Native mentors working with Native players."

Nash started playing because she knew it was a Native sport.

"We've been playing lacrosse in Minnesota for a long time," she said.

But as it popularized and became more mainstream, she noted the game becoming more expensive and her encounters with other players and coaches less connected to the game's roots.

"We're able to re-bring that back," Nash said. "These girls will bring back to their high schools and middle schools an awareness of where this game started from."

Corbyn Tao was a former player with the Minnesota Swarm, an indoor lacrosse team that played its games in St. Paul's Xcel Energy Center. The team relocated to Georgia in 2015. 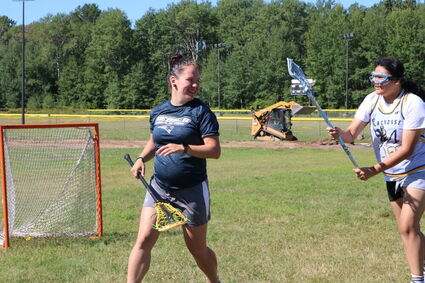 Lax-4-Life camp coach Veronica Nash, of Minneapolis, and a coach with Twin Cities Native Lacrosse, said it was awesome to see Native American players learning from Native American coaches. "A lot of us didn't grow up with that," Nash said.

"The culture, the heritage – it's a well-rounded game," Tao said of a game started by Native Americans as "stickball," and first observed by white settlers in the 1600s, according to the sport's governing body World Lacrosse.

Tao said he likes how individual skills mix with team concepts, things incorporated later with the advent of other North American sports, including baseball and basketball.

Tao grew up playing box lacrosse – a faster-paced game played in indoor hockey arenas. Outside the school last week, he said he enjoyed the "high skies" of field lacrosse.

"I want to provide the same opportunities to our youth that I had, but on a more personal level with our Native kids," Tao said.

That included Wanbdi Thompson, 8, of St. Paul, who whipped a shot then joined teammates in collecting balls – some having fallen wide of the net, but most hitting home.