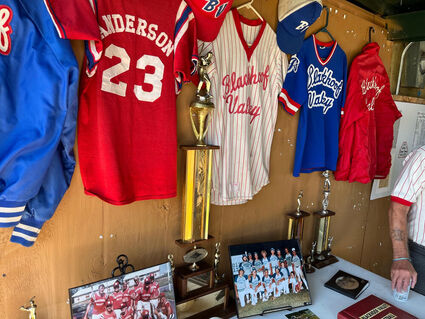 Some of the old jerseys and trophies were on display during the reunion of the 1972 Carlton County men's fastpitch championship team from Blackhoof Valley.

The mystery may have been solved.

On Monday, Aug. 15, pharmacies across Carlton County were having an unexplained surge in sales of Bengay, ice packs, and Ace bandages. The reason may have been those seeking recovery help from the old-timers' game played by the 1972 Blackhoof Valley Men's Fastpitch Softball team.

Fifty years ago, the team went 18-0 in the Carlton County 10-team league, and they were reunited recently to remember days of old and see if they could still hit, run, and field. The game took place at the historic school field in Blackhoof Valley, south of Carlton.

With assistance from family and friends, Ryan Swanson, son of the 1972 Blackhoof coach the late Sherm Swanson, organized the day's events. It included the opening team player recognition, the national anthem, ceremonial first pitch, a scrimmage, and even a home run derby. Several '72 players have since passed away, but many softball competitors returned, rounded third and came home to Blackhoof Valley.

Blackhoof Valley was one of the few Carlton County fastpitch teams in the 1970s with "full" uniforms - hats, pants, jerseys, jackets, the works.

Players from the 1972 team were rewarded, on Sunday, by Ryan Swanson with special BV red hats based on the old team logo.

The Blackhoof squad did all their own fundraising with community, business, spouses, and family support. The Blackhoof annual weekend tournament, held in early August, consisted of 10-16 teams, coming from locations such as Hibbing to the north all the way to Cambridge from the south. 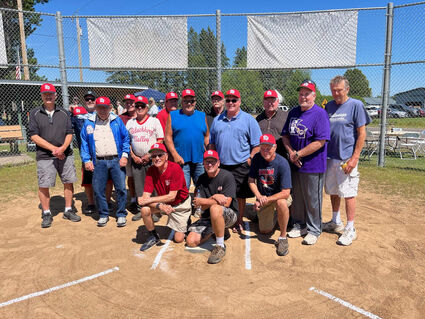 Members of the 1972 team pose with their new red Blackhoof Valley hats.

The scrimmage lasted five innings, then saw players taking a break for the home run derby, and concluding with two more innings. A full day and game. No speed records were set on the base paths, but several hits still managed to climb over the fence.

The smiles, shaking of hands, and laughter was contagious. The community bonding is very special and still continues to this day.

Blackhoof supporters were there selling brats, burgers, chips and had a simultaneous rummage sale going on trying to raise funds needed to repair the old schoolhouse roof!

Congratulations on 50 years and a fine event.