Blacksmith finds inspiration at the fair 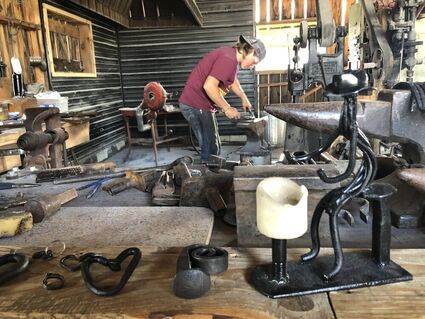 It was there that the Cloquet High School junior once escaped as a youngster while his parents were working in the art building. He'd become immersed watching blacksmith Steve Davis and others crafting red hot metal into tools and trinkets.

"My parents would never let me touch the pictures, because they were worried I would break them or something, so I would come in here and watch Steve work for hours, even before the fair started," he said.

Hietala was focused when he worked on a project at this year's fair, placing the metal in the middle of red hot coals, squeezing a bellows to make the fire burn even hotter, then removing the glowing piece of metal to hammer it into shape on an anvil several feet from the forge.

When the metal cooled down too much, Hietala used a long-handled pair of tongs to grab it and plunge it back into the fire. Eventually, the metal heated up again and he brought it back to the anvil for more hammering until it was done.

The final product - a closed S-shaped key chain - got added to a bench at the front of the work space.

Fair visitors came in and out of the shop, watching Hietala, admiring the various items that he'd created, everything from household tools, rings and heart-shaped decorations to a whimsical and elaborate stick figure warming its hands over a candle.

The teen said he gets into a zone when he works. He likes the alone time, he said.

"It brings out the artistic side," he said about the joy of blacksmithing. "The rest of the family are artists ... I found it in blacksmithing. It's relaxing too."

Davis watched over the younger blacksmith during the fair, happy to have him in the shop. Davis learned the craft through a community education class 17 years ago.

"He's a talented blacksmith - fun to watch and fun to work with," Davis said, adding that he remembered Warren watching for hours.

Heitala said Davis piqued his interest, but he learned mostly from reading books and watching videos online. He has been honing his skills for about three years at his own blacksmith shop, located in a former storage shed outside his home in rural Carlton.

"It's interesting to me that he wanted to come back and work there," Davis added. "I didn't know he'd come so far with it. He does some beautiful work."

It's a craft that's been around nearly 4,000 years. In the Middle Ages, blacksmiths made armor, tools and weapons of war. 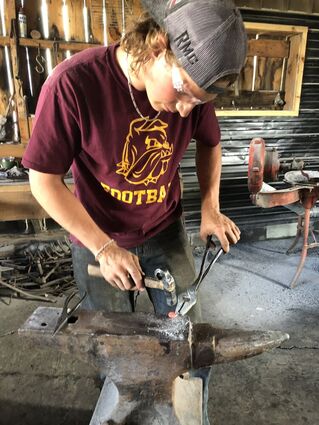 Although it declined as an occupation to mostly farriers (who shoe horses) and those who made architectural ironwork early in the 20th century, blacksmithing is growing in popularity among hobbyists. For now, that's what it is for Hietala: a hobby he fits in between school and sports, including football and wrestling.

At the fair, Heitala got right back to work after his interview. Although the 2022 fair was his first time being on that side of the blacksmith shop wall, he seemed relaxed and self-assured.

"To be honest, it was surreal," he said after his four days at the fair. "But it was fun to be there and see people you know and have the older people come talk and hear their stories. A lot of them remembered seeing things on the farm growing up."

To see more of his creations, find Hietala on Instagram at warrens_blacksmithshop.