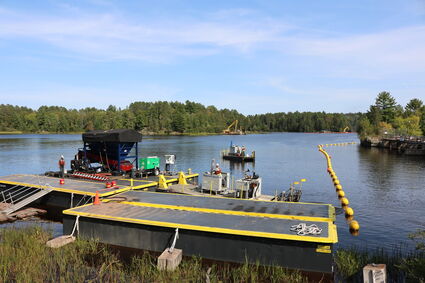 Contractors wrap up work earlier this month on a $10.5 million project to treat contaminated sediment in areas across this 40-acre section of the St. Louis River in Scanlon. They're using a first-of-its-kind process to apply a thin layer of carbon atop the sediment.

Until forced to close this summer to make way for a construction site, the Scanlon fishing pier off Highway 61 had been a popular, yet hard-to-quantify destination.

"We had no idea how popular a fishing spot this was until we fenced it off," said LaRae Lehto.

"A lot of high school and middle school kids were upset this summer," Lehto concluded.

The reason for fencing off the fishing pier and canoe-and-kayak launch near the Western Lake Superior Sanitary District pump station? A historic project utilizing carbon pellets to cover up and contain contaminated sediment at the bottom of the river.

"There's a lot of interest in this project because it's the largest of its kind in the world," Lehto said.

Lehto is a Minnesota Pollution Control Agencycontaminated sediment program coordinator, and Adams is site supervisor for the Kemron-Arrowhead joint construction venture. The $10.5 million project wraps up soon. To better understand the work, the Pine Knot met this month with the team responsible for the river cleanup. It's a partnership between the Environmental Protection Agency and MPCA as part of the federal Great Lakes Legacy Act aimed at cleaning up 42 "areas of concern" across the lakes. The St. Louis River makes up one area of concern, with a whopping 80 checklist items.

"The areas-of-concern program is targeting legacy contaminants," Lehto said. "Those are contaminants that occurred before modern regulation in the 1970s."

Prior to legislation such as 1972's Clean Water Act, mills and municipalities discharged wastewater into the river, Lehto said.

Normally, the resulting contaminated sediment is either removed via dredging or sequestered under multiple feet of new coverage material. For instance, a $42 million remediation project on the river at Munger Landing in West Duluth started in July, and is expected to dredge 110,000 cubic yards of contaminated sediment to be landfilled.

But because the riverbed through Carlton County is too rocky to dredge and wetland areas too sensitive to bury, the EPA and MPCA chose an innovative new project using a thin layer of carbon to cover up the dioxins and furans embedded in the sediment and appearing in local fish. The contaminants are bioaccumulative, sources explained, meaning they travel up the food chain - from microscopic bugs, or benthic organisms, to fish and waterfowl.

And while there is no state health department consumption advisory related to dioxins or furans for St. Louis River fish, they're the sort of contaminants which can carry a trail of health concerns with them up the food chain.

"We want to suppress those at the base of the food chain," Lehto said.

The project was expected to complete its water work last week, having spread carbon pellets over 18 areas, totaling 13.5 acres, located within a 40-acre footprint in front of Minnesota Power's Scanlon dam.

Much of the work has been outside the main river channel, located in backwater bays, where contaminants attached to organic material and settled without enough current to pull the contaminants back out.

Speciality contractors from Atlanta (Kemron Environmental Services) and Kansas (Arrowhead Contracting) combined to conduct the work. They've used a series of barges and push vessels to maneuver equipment and excavators around the watery job site. Their work has been visible only from a distance for travelers over the Highway 61 bridge in Scanlon.

On the day the Pine Knot visited, there were two long-reach excavators on floats and barges in the water, with construction workers ferrying equipment between them in boats.

A hopper loaded with carbon pellets can run for eight hours, and the skilled contractors made the work look mundane. But the site featured obvious perils not found on more routine job sites.

"Whenever you see one person, there's two," Adams said. "It's the absolute buddy system out here at all times."

No scuba divers were required to conduct the work. Instead, the carbon pellets were dispersed from the air-driven hoppers suspended above water by the excavator arms. Adams compared the process to salt being dispensed from a snowplow.

"It works like a fertilizer spreader you use in your yard," Lehto added.

The work areas were generally shallow, at 1 to 7 feet, and featured lots of vegetation. In deeper areas with higher current, sand was used to weigh down and aid the carbon in reaching the bottom.

"When it's placed in the water, it disperses relatively quickly and because carbon is lightweight it has that potential to move and migrate," said Chanelle Cruz, project manager for the U.S. Army Corps of Engineers, which has oversight of the project. "You don't want to place amendment that immediately is going to be removed just based on the natural system, so the sand cover comes in and helps weigh that down and keep the carbon amendment in place."

Because the carbon pellets break up upon contact with water and settle quickly into a thin layer, the process is less impactful on existing wetlands than dredging or a more robust covering would be. Sources described normalcy returning to the environment in a day or two.

Prior to conducting the work, the agencies involved undertook years of core and sediment sampling to locate the most contaminated areas.

Now in the aftermath of the work, they'll continue to study the local fish; if contaminant levels go down, they'll know the project was successful.

There's already a strong belief the work will succeed. Sources are expected to present their work at a remediation conference early next year. The project is also scheduled to be replicated at Minnesota Power's nearby Thomson dam. That $40 million project on the 390-acre reservoir is ticketed for 2024 and features 80 acres of contaminated sediment to be covered using the carbon method. 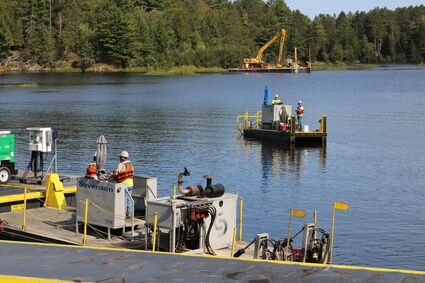 Workers used a series of barges to reach 18 areas totaling 13.5 acres on the river. The barges can be used together to create floating platforms of various shapes, "like Lego barges," said LaRae Lehto (not pictured) of the Minnesota Pollution Control Agency.

"In 2018, the MPCA was given $25 million in state of Minnesota bond funds to get all of these projects done on the St. Louis River," Lehto said. "And that has allowed us to leverage a match of 65 percent from the federal government."

Today, more than 60 percent of the river's 80 checklist items have been completed. The Thomson dam project figures to be one of the final projects, with a goal to delist the river as an area of concern by 2025.

"It's a massive amount of work, but it's been really great," Lehto said. "The federal funding coming in locally would blow people's minds. But it's hundreds of millions."

For now, the Scanlon site will remain secure into the fall. The ongoing project also includes landside improvements to widen the access road and reestablish the fishing pier and boat launch.

"The fencing will stay up for a period of time," Lehto said. "The public has been a bit of a nuisance out there, breaking through the fence and coming onto the site. But as a reminder, the site is still closed to public access, because it's an active construction site."