Volunteers come together to feed the children 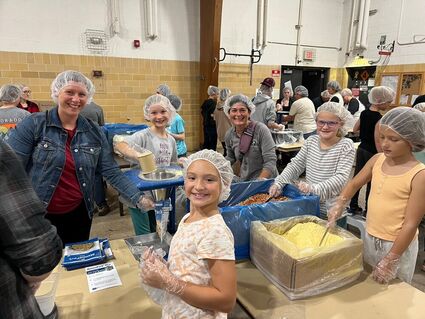 More than 430 community members - including this happy group - came to the Cloquet armory to help pack MannaPack meals for the Feed My Starving Children MobilePack event last weekend. The ingredients for each meal are scientifically designed for severely malnourished children.

You've heard of manna from heaven? Last weekend, 432 volunteers came to the Cloquet Armory and packed 109,080 special MannaPack rice meals for the Feed my Starving Children charity in a "mobile pack" event.

"Our community is awesome," said host Alyssa Snesrud. "It's so fun to see everyone coming together to do so much good, and to have fun while doing it."

Snesrud said she and her husband had brought their kids to several FMSC MobilePack events in the Twin Cities when they lived there, so she wanted to bring it to Cloquet when they moved back home. This was the third event she and her leadership team helped put together in Cloquet.

All together, the volunteers packed enough meals for 298 kids to be fed for an entire year in four two-hour packing sessions.

Snesrud said they exceeded two of three goals - raising more money and packing more meals - and even though they fell short on the volunteer goal, the volunteers exceeded expectations with all their hard work.

It's a really fun event, she said, with lots of music and competitions between tables. Although the charity is Christian-based, anyone can volunteer, kids included. "It draws all kinds of people who just want to help," Snesrud said. 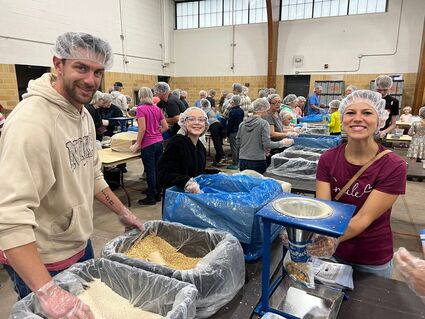 The group raised over $30,000 from local businesses, individuals and churches to pay for the supplies for the meals, which are scientifically designed for severely malnourished children and shipped to 70 countries around the world. Main ingredients include textured soy for protein, rice, dehydrated vegetables and a vitamin and mineral blend.

"The businesses also bring teams of people so they can team-build and see their money at work," Snesrud said.

They plan to hold another event next September at the Cloquet Armory again.