Lumberjacks topple East for the second time ever 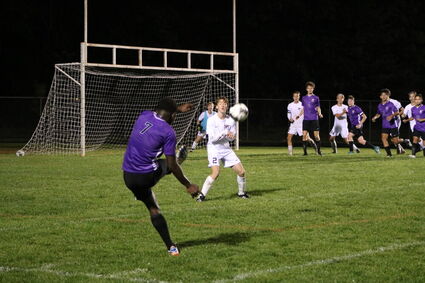 Cloquet-Esko-Carlton's Jordan Aultman strikes the freekick that twisted into the net with 8 minutes remaining Thursday, Sept. 15, delivering the winning goal in a 3-2 victory over Duluth East.

The annual match between Cloquet-Esko-Carlton and Duluth East finished with a dramatic 3-2 win for CEC on Thursday, Sept. 15.

The 'Jacks had early trouble, with Greyhound senior Pete Onchwari scoring just 4 minutes into the game. It didn't take long for a sharp East offense to find their second goal, coming in the 16th minute from an Evan Tomczyk long shot. Their domination continued throughout the first half as the Lumberjacks were unable to find a foothold.

CEC closed out the first 40 minutes frustrated and in need of a second-half spark.

The game kicked off again and this time, it was the 'Jacks on the front foot.

Just under 4 minutes into the second half, junior Joe Bailey found CEC's spark, scoring from the penalty spot, bringing the game to 2-1. The comeback continued and after 8 minutes, CEC's Elijah Aultman found the equalizer following a chippy run through the box.

Nearing the end of the game, with 8 minutes remaining, the referee penalized Greyhound goalie Jack Ringsred with a red card for a challenge on Aultman. With the freekick following the red card, Lumberjack senior Jordan Aultman produced a miraculous strike to score the winning point. Aultman's kick was positioned not far from the sideline near the 'Jacks bench; he struck a deep curler that tucked itself into the left corner of the goal.

Neither side scored in the remaining eight minutes and the game ended 3-2 in favor of CEC. For the second time in school history, they had defeated the Greyhounds. The Lumberjacks previously won in 2020.

After the game, CEC head coach John Sundquist explained what changed in the dramatic second half.

"I thought our forwards were coming in a little too deep, so we tried to keep them up higher ... I think that opened up the game," Sundquist said. "You get the ball to bounce your way and a couple calls, and you come out with a win."

"I don't want to give away all our secrets, but it's just a big change of focusing on playing to the feet and moving the ball," Marquardt said. "The first half was all long balls ... we were frantic playing against a team that ran far in the AAA State Championship last year."

The junior thought the team was nervous at the start of the game, but praised CEC's perseverance: "You can't teach attitude," he said.

Sundquist is rotating Marquardt and senior goalie Lucas Rauner every other game for the regular season. A decision will be made come playoffs, when Sundquist will have to choose between two players he claimed are "the two best goalies in the section."

The Lumberjacks have a younger team than in recent years, and Sunquist said he is still figuring things out. 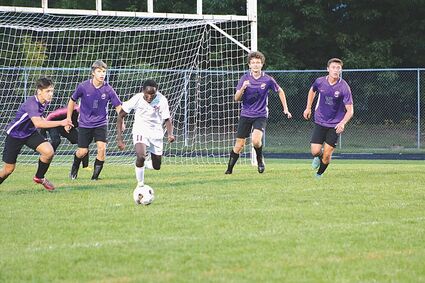 "A lot of it is luck, and you see things that work and you stick with that," the coach said. "Some things don't work early on and you scrap the plan a little bit and you just try to make adjustments."

"You look at the talent we have on the field, it doesn't take a genius to figure out we're going to be pretty decent," Sundquist said. "We're trying to keep our heads, you know?"

Last Saturday's game between Grand Rapids and CEC ended in a 3-0 win for the 'Jacks, and CEC beat Superior 2-1 Tuesday, giving them a seven-game win streak. CEC plays at home at 11 a.m. Saturday, Sept. 24 against Princeton.

Editor's note: The year that CEC previously defeated East was corrected after initial publication of this story.