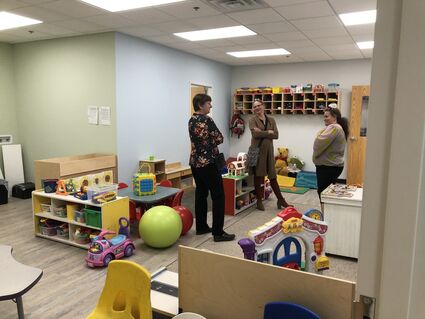 Ruth Reeves and Linnea Barto talk with Li'l Lumberjacks program director Darla Pappas in one of the child care program's new classrooms during its open house Thursday. Li'l Lumberjacks and Kids Corner moved into the newly renovated space at the Pine Tree Plaza in early September.

After nearly two years of searching for a new space, it took workers only 10 weeks or so to turn a former furniture store into a new home for the Cloquet Kids Corner and Li'l Lumberjacks Learning Center programs.

The cavernous empty space at Pine Tree Plaza in Cloquet is now a long winding hallway lined with bright classrooms - Kids Corner on the right, Li'l Lumberjacks on the left - ending in an indoor gym for kids.