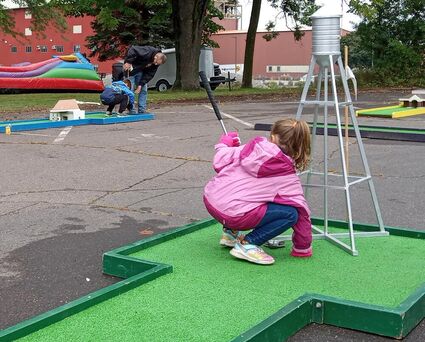 At least half of the mini golf mystery proffered in the Sept. 30 issue of the Pine Knot News has been solved - its origin story - but the mystery of where (and by whom) the historic mini golf set was taken remains unknown.

Readers may recall that a Cloquet "landmark" mini golf set was set up for the West End Flourish event Sept. 24, after an employee of Lyn's Auto Body found it in a dumpster behind the U.S. Bank building a couple weeks before. The homemade set consisted of six mini golf holes, each in two parts, each adorned with a different Cloquet landmark, including the Frank Lloyd Wright gas station, Cloquet High School, the old water tower, the Barn hockey arena, the Cloquet armory and the Cloquet library.

We had heard that a long-ago Shriners group built the set for use by the public every July Fourth, but reader Mary Thompson recalled that members of the Golden Kiwanis Club, several of them former teachers, made the set for the Cloquet Senior High all-night grad party in the 1990s.

Thompson said they used it for about 10 years at least.

"It was beautiful. It was shop teachers that were in Kiwanis that made it," she said, recalling specifically Ed Chinook and Gary Lutter, among others. "They made it and had flags for it and everything. I think it took up half the gym floor at the old middle school."

US Bank president Tony Vittorio said the set had been stored in the bank's basement for decades. He reached out to the schools 20 years ago to give it back, then checked with the Cloquet Chamber - which used it a couple times - and the Carlton County Historical Society. Nobody wanted to take it because it takes up a fair amount of storage space. 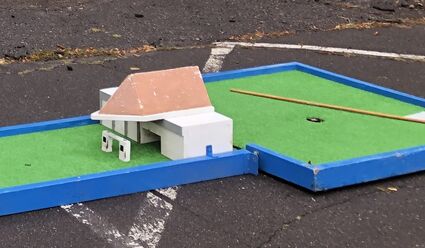 The set was stolen sometime between the night of Sept. 24 and the morning of Sept. 26 from its temporary resting spot next to Lyn's Auto Body. We are still hoping a good Samaritan took the set to make repairs, and plans to return it so a new generation can play during special city events.

"It's sad to think that somebody stole it, it's a part of history," Thompson said. "It was a gorgeous set. People should keep their eyes open, or maybe someone will come forward. I'd love to see it again."