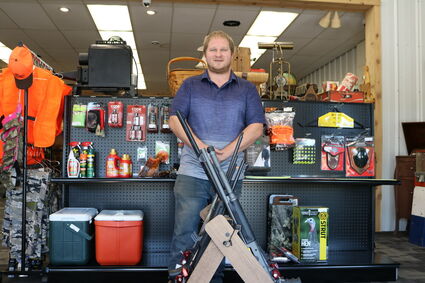 Manager Cory Drickhamer stands at the entryway to the MarksMan Trading Post along Minnesota Highway 33 in Cloquet. The pawn shop opened in November 2021.

When Cory Drickhamer pulled in for the start of business at the MarksMan Trading Post one day earlier this week, there was a customer right behind him. Within moments, the pawn shop had five more used rifles to sell, including a Remington .30-06 pump carbine - a well-regarded deer hunting rifle.

"I bought five guns in the first 10 minutes I was open," Drickhamer said. "I didn't even count my cash register drawer yet."

MarksMan Trading Post celebrates its one-year anniversary in November. When the Pine Knot first met Drickhamer, he was vacuuming the carpeted floors and the store was decorated for Halloween.

"We try to make it like an organized mess," Drickhamer said.

The store features rifles in the entryway and along the back wall, along with display cases full of handguns, a wall of brand-new gun-cleaning supplies, and aisle after aisle of antiques, household items, camping gear and collectible oddities.

"Just because it's old doesn't mean it will sell," Drickhamer said of the carefully selected antiques, including a series of wood hutches and old cabinet-style record players.

Drickhamer spent 10 years as a manager at the Kentucky Fried Chicken in West Duluth. When Tulsa, Oklahoma-based business owner Leslie Welch approached Drickhamer about changing careers and joining operations at the pawn shop, Drickhamer crunched the numbers and then climbed aboard.

Now, he's learning the pawn and barter trade. Moving guns and ammunition isn't something he'd seen himself doing before taking his latest job. But he's caught on quickly.

"I learn as I go," Drickhamer said. "I learn a lot from the older gentlemen who come in and like to talk. They're super-knowledgeable and I soak it in."

"We all manage it together," Drickhamer said.

Summers and warm weather have proven to bring the busiest days, before people "get their first heating bill," Drickhamer said.

He described how its location along Minnesota Highway 33 in north Cloquet presents 28,000 vehicles per day during the summer peak.

Guns and ammunition are the shop's forte. The store sells grab-bags filled with unfired commercial rounds and there's a shelfful of brand-new ammunition still in the box.

The owner goes to auctions and holds a warehouse of inventory used to supplement what's on the shelves. 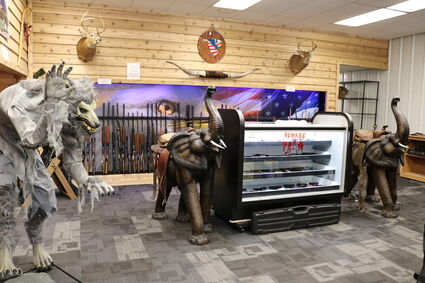 Already decorated for the spooky Halloween season, MarksMan Trading Post sells rifles, handguns and ammunition along with a host of other camping products, household goods and antiques.

"People love old signs," Drickhamer said. "I'll get signs and they'll be gone within a week - gas, oil, cigarettes, breweries. Sex sells, if there's a (pinup) girl on the sign - not to be sexist."

Two things Drickhamer won't sell: tools or electronics. He doesn't want to support anything stolen being sold, and those items are sought after in burglaries, he said.

Otherwise, "we try to make it a place for everybody's needs," he said.

The MarksMan Trading Post was once home to Alaspa's Gas & Grocery. The Tulsa-based owner bought it out of foreclosure, putting in a newly paved parking lot, a new awning and a sign that towers above travelers on the highway. The assessed value of the lot and building is $300,000, according to a Carlton County property details report.

"It's almost been a year," Drickhamer said. "We're just trying to establish a business and go from there."