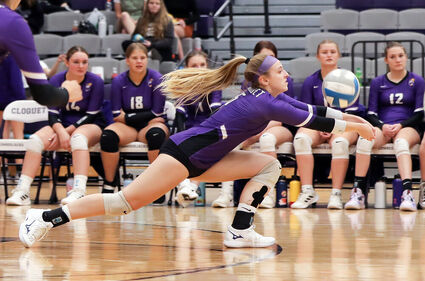 One year removed from making it to the Section 7AAA finals, the Cloquet volleyball machine continued to crank out wins and headed into the last two weeks of the season with an impressive 18-5 record.

In class AAA, the Lumberjacks are currently ranked 13th out of 61 teams. In the entire state, they are ranked 60th out of 405 schools. The 'Jacks are also undefeated at home at 5-0, with only one remaining match, versus rival Hermantown on Tuesday, Oct. 18.

"Greenway and Esko have a history of good volleyball programs," said head coach Heidi Anderson. "Our girls get pumped up to play both of those teams. The crowds are into it and make a lot of noise. It really makes it fun for the girls. And, of course, when we play Esko, many of our girls know their girls from playing with them and against them in other sports." Cloquet has been successful this year by getting contributions from an assortment of players. The Esko victory saw outside hitter Ava Carlson take over with her booming hits from the front row and as a back row attacker. There have also been matches in which middle blocker Aili Buytaert has controlled the net with blocks and kills from the middle. But the one constant has been the play of the setters and libero.

A libero is expected to be a defensive specialist, digging opponents' attacks. But Cloquet libero Quinn Danielson is also a skilled passer and even an offensive force.

"Quinn is very talented as a passer and has a really tough long and short serve," Anderson said. Danielson can go in for anyone in the back row and often goes in for the middle blockers to give them a rest before they re-enter to play front row, the coach explained.

The Lumberjacks run an offense that employs two setters: Carly Johnson and Ella Maslowski. This offense is widely known as a 6-2 offense. The setter comes from the back row and sets the pass to a line of three hitters. When Maslowski is setting from the back row, Johnson rotates to the front row and becomes a hitter/blocker. Cloquet's setters need to know how to hit, block and dig as well as setting and decision making. The position is similar to a quarterback in football or a point guard in basketball. The setters are the ones who handle the ball the most and make decisions as to where it is going to go.

There are two big obstacles facing Cloquet before the playoffs begin: Grand Rapids and Hermantown. The Thunderhawks, whom the 'Jacks played Thursday after this edition of the Pine Knot went to press, are the highest-ranked team in the region. They had a record of 21-4 and are ranked third out of 61 teams in Class AAA. They are also ranked 20th out of all Minnesota schools.

They were the team that defeated the Lumberjacks last year in the section final to claim the bid to go to the state tournament. 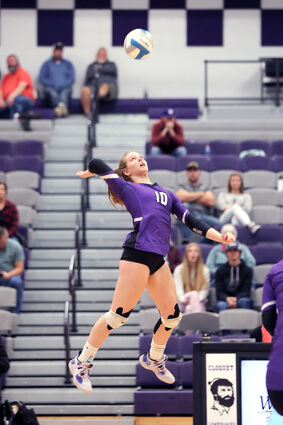 Cloquet Junior Ava Carlson swings for a kill during the Lumberjacks' volleyball match with Hibbing.

"Rapids is consistently ranked in the top 10 of the state," said Anderson. "They play a really tough schedule. They have a really talented setter and they return most of their starters from last year's state-qualifying team."

Hermantown is the foe for the last game of the regular season. The Hawks are 20-5 and ranked 12th out of 61 in AAA, one spot ahead of Cloquet.

"They were really strong at the beginning of the year and one of the teams to keep an eye on; they have a good, solid lineup," Anderson said. "We are looking forward to tough competition. The girls are excited. We have played in big environments and have been tested in front of large crowds. It will be fun."

Playoffs start Oct. 27 with the Section 7AAA final on Nov. 5.