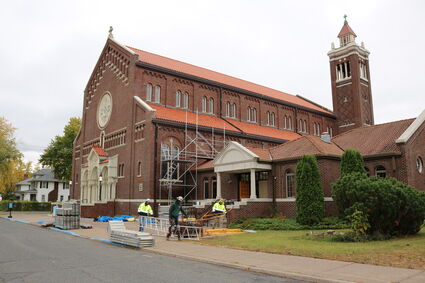 Assigned by the local diocese's bishop to Queen of Peace Catholic Church 15 months ago, the Rev. Nick Nelson praised his fortune.

"For me, who thinks beauty, who thinks the physical appearance of the church, especially inside, is so important, I was really grateful to be here," Father Nelson said. "I would struggle at some of the more modern churches, to be honest. They're less sacred."

Inside Queen of Peace's ornate nave, where parishioners gather for worship, a person can feel small surrounded by its tall columns and interior majesty.

"It creates the right space to approach God in the right way," Nelson said.

Built after the 1919 fire to replace the church that came before it, Queen of Peace will celebrate the building's 100th anniversary in 2026.

In order to make it that long, the church has required keen attention to maintenance and repair.

Last week, contractors wrapped up $200,000 worth of work to repair stained glass window frames surrounding the church. The Pine Knot met with Nelson and spoke to others about the work and what it means to maintain a massive church and school that helps define the city's culture and skyline.

"It had to be done," Nelson said. "Otherwise in 10-15 years those beautiful stained glass windows would have just fallen into the church."

Tim Fosness is a parishioner at the church. A one-time contractor who now works in facilities management, Fosness said it felt natural for him to spearhead the project.

"It's my duty as a parishioner there to take the reins on it," Fosness said. "All the people before us took this church as their own and did what they needed to do to keep it what it is. It was my duty to keep that going."

Fosness and the church's building and maintenance committee were first alerted to the deteriorating condition of the windows during an earlier roofing project. The church features several terracotta roofs that are repaired and replaced in cycles. In the most recent one, contractors noticed the window casings and other parts were losing their paint and the wood getting soft from rot.

Fortunately, in 2019 the church raised $760,000 during a capital campaign for maintenance and repairs. The committee agreed prior to the summer that it was the right time to address the failing window systems.

"It's not a destination, it's a continuous journey to maintain these older churches," said Dan Tierney, the building and maintenance committee chair.

Tierney added that minor brick work was conducted while the scaffolding was in place surrounding the church throughout the summer.

As contractors with Duluth-based Swanson & Youngdale tore down the final scaffolding last week, Nelson led a tour around the work.

"The bricks are still very strong up there and in good shape," he said.

The church is keeping better records than ever before on what repairs are made and when, Nelson added.

"The nice thing about being a pastor at a parish like this is you have people who offer all of their different areas of expertise and talents," Nelson said.

Fosness inspected the windows using an aerial lift prior to the work. He confirmed that the windows and sills were in rough condition. 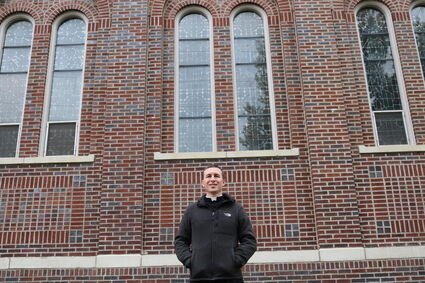 The Rev. Nick Nelson stands beneath stained glass windows at Queen of Peace Catholic Church in Cloquet. Windows surrounding the church received $200,000 in repairs which ended last week after a summerlong project.

"We didn't know how much rot we had until we got up there," he said. "We did know it all needed to be stripped and painted."

"Things back in that era were built for the long haul," he said.

Next up for the church? Some important inspections.

"We want to get up into the attic and get some inspections going on the trusses and framework," Fosness said. "That's our next mission."

For Father Nelson, who can often be seen strolling the neighborhood, the church is a blessing, one he's proud to maintain.

"This is a different type of building than an Aldi or Super One," he said. "And churches should be different, because they allow you, when you enter them to realize, 'OK, this is different. This is sacred.'"